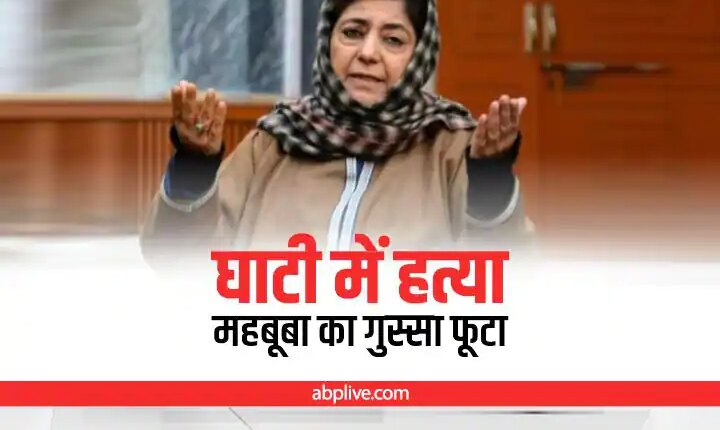 Jammu Kashmir Terrorist Attack: In Jammu and Kashmir, once again the terrorists have targeted the common citizen. A Rajput woman was shot dead by suspected terrorists in Gopalpura, Kulgam. The woman was a teacher by profession who died during treatment in the hospital. After this incident, a search operation is being conducted by the security forces to cordon off the entire area. At the same time, former Jammu and Kashmir Chief Minister and PDP leader Mehbooba Mufti and former CM Omar Abdullah have surrounded the Government of India.

Mehbooba Mufti tweeted that, the Indian government’s claims of normalcy in Kashmir are proving to be false. He said that it is clear that the number of civilian killings is increasing day by day and it is a matter of concern. He further said that instead of condemning this act of cowardice, BJP plays in anti-Muslim.

Despite GOIs fake claims about Kashmir being normal its obvious that targeted civilian killings are on the rise & a deep cause of concern. Condemn this act of cowardice which sadly plays into the vicious anti muslim narrative spun by BJP. https://t.co/3TK6rxXu6S

At the same time, National Conference (NC) vice-president Omar Abdullah termed the murder of the teacher as an “abominable” act. He said, “Rajni was a resident of Samba district of Jammu division. She was working as a teacher in Kulgam in South Kashmir, she lost her life in a ghastly attack. My condolences to her husband Raj Kumar and family. Another house was destroyed due to the violence.

Rajni was from Samba District of Jammu province. A government teacher working in Kulgam area of ​​South Kashmir, she lost her life in a despicable targeted attack. My heart goes out to her husband Raj Kumar & the rest of her family. Another home irreparably damaged by violence.

Let us tell you, Kashmir Police tweeted that the terrorists opened fire on the female teacher in Gopalpura area of ​​Kulgam. The teacher’s name is Rajnibal. She was a resident of Samba and her husband’s name is Rajkumar. At this time she was in Chawalgam in Kulam and her duty was going on in Gopalpura. Police said that all the terrorists who were involved in this heinous crime will be identified and eliminated soon.

Kashmiri Pandit murdered for the second time in May

It is worth mentioning that, for the second time in the month of May, a Kashmiri Pandit has been murdered. On May 12, Rahul Bhat was shot dead inside the Tehsildar’s office in Chadoora tehsil of Budgam district. So far seven targeted killings have been done in Kashmir during the month of May. Of these, four were civilians and three were policemen, who were not on duty.