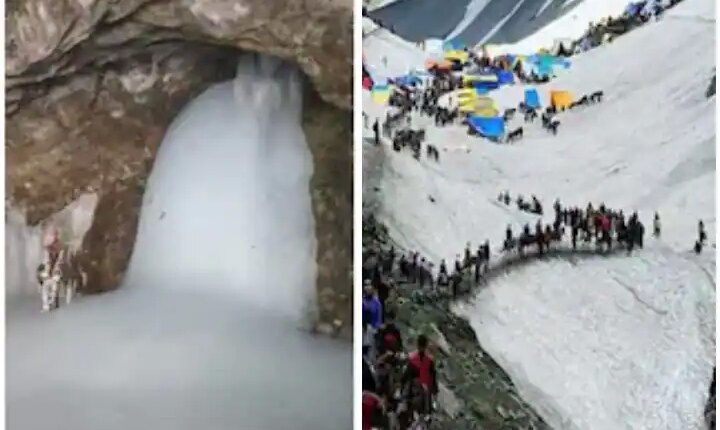 In this sequence, on Wednesday, Director General of Jammu and Kashmir Police Dilbag Singh visited several camps to ensure the security of the Amarnath Yatra, during which he along with the officers of the Central Reserve Police Force (CRPF) provided security for the pilgrims of the Amarnath Yatra. Review the system.

The DGP of Jammu and Kashmir visited the Walnut Factory Qazigund, Lambar in Ramban and Amarnath Yatra camps at FC Mir-Bazar, during which he discussed the necessary security arrangements here. Apart from this, he has talked to the CRPF officials about the security arrangements in Navyug Tunnel.

According to a statement from Jammu and Kashmir, DGP Dilbag Singh sought a report on the security arrangements of the National Highway and the surrounding area along with ensuring the security of the Amarnath Yatra and directed to strengthen its security and increase surveillance. Huh.

Instructions to increase the security of National Highways and Camps

Apart from this, he has also given instructions to keep an eye on specific elements and their movement in the areas around the camps of Amarnath Yatra along the National Highway. So that there should be no disturbance of any kind in the Amarnath Yatra. The DGP stressed on increasing the communication and coordination between the security forces for the safety and assistance of the pilgrims.

The DGP has directed the security forces to keep surveillance of all routes and important places round the clock to keep the security tight during the Amarnath Yatra. Along with this, he has emphasized on increasing the security of langar and parking places.