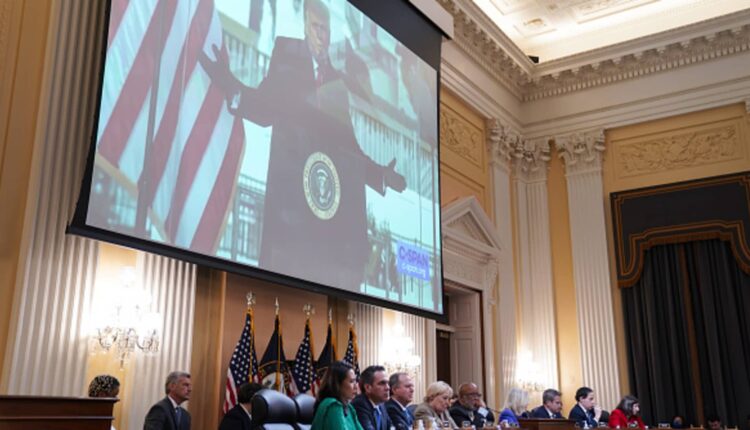 The House Select Committee to Investigate the January 6th hearing listen to a video of President Donald Trump in the Cannon House Office Building on Thursday, June 9, 2022 in Washington, DC.

In its first public hearing, the House select committee investigating the Jan. 6 Capitol riot delivered an unambiguous message: There was a calculated effort to overturn the 2020 election results, and former President Donald Trump is to blame.

“Donald Trump was at the center of that conspiracy,” the committee’s chairman, Rep. Bennie Thompson, D-Miss., said bluntly in his opening statement. “Ultimately, Donald Trump — the president of the United States— spurred a mob of domestic enemies of the Constitution to march down the Capitol and subvert American democracy.”

Two other witnesses, a U.S. Capitol Police officer and a documentary filmmaker, spoke in person to recount the “carnage” they saw firsthand during the riot. And the committee played a harrowing montage of never-been-seen footage from the riot itself, showing new perspectives on the pro-Trump mob as it rushed toward the Capitol, swarmed police officers and attacked them with weapons.

The nine-member panel also made clear that it has much more to share from the more than 1,000 witness interviews and 140,000 documents amassed over the course of the investigation so far. It emphasized that the investigations is still on going and that the Justice Department has even more evidence, including encrypted materials, it hasn’t yet reviewed.

Rep. Liz Cheney of Wyoming, the committee’s vice chair and one of its two Republican members, laid out a framework for how the next six hearings will unfold. Her opening statement Thursday night suggested that each hearing will focus on a separate piece of what she called “a sophisticated seven-part plan to overturn the presidential election and prevent the transfer of presidential power.”

Trump himself oversaw and coordinated that multi-pronged plan, Cheney said.

“As you will see in the hearings to come, President Trump believed his supporters at the Capitol, and I quote, ‘were doing what they should be doing,'” Cheney said. “This is what he told his staff as they pleaded with him to call off the mob, to instruct his supporters to leave.”

Trump on Thursday night and Friday morning railed against the committee in a series of posts on conservative social media platform Truth Social, accusing the lawmakers of not showing “the many positive witnesses and statements” and playing “only negative footage.”

The first hearing served to set the table for the subsequent presentations, which are expected to take place over the coming weeks. At least three more hearings have been officially scheduled for next Monday, next Wednesday and next Thursday.

The second hearing will show that Trump and his advisors knew full well that he lost the 2020 election to President Joe Biden, Cheney said. “But, despite this, President Trump engaged in a massive effort to spread false and fraudulent information, to convince huge portions of the U.S. population that fraud had stolen the election from him. This was not true,” Cheney said.

She then played a clip from a witness interview in which former Trump campaign spokesman Jason Miller described Trump being told “in pretty blunt terms” by a campaign data expert shortly after Election Day that he would lose to Biden.

She also played a snippet from an interview with Trump campaign lawyer Alex Cannon, who recalled telling then-White House chief of staff Mark Meadows in mid-to-late November that he was unable to find any evidence of election fraud “that would be sufficient to um change the results in any of the key states.”

Meadows’ reaction was to conclude that “there’s no there there,” Cannon testified.

After playing a clip of Barr calling one particular election-fraud conspiracy “complete nonsense,” Cheney played a clip of Ivanka Trump telling the committee that she “accepted” Barr’s conclusion that the Department of Justice found no evidence of widespread fraud.

The hearing, which is set for Monday at 10 a.m. ET, will also feature testimony from Chris Stirewalt, the former Fox News political editor who came under fire from Trump’s supporters after Fox called Arizona for Biden before other outlets on Election Day 2020. Stirewalt, who was fired from Fox in January 2021, revealed his plan to testify Friday morning on the NewsNation cable network.

In the third hearing, Cheney said the committee will show that Trump “corruptly planned to replace the Attorney General so the U.S. Justice Department would spread his false stolen election claims.”

She touched on Trump’s attempt to install Jeffrey Clark, a DOJ lawyer, as acting attorney general and have him send letters to key states claiming that the government has “identified significant concerns that may have impacted the outcome of the election.”

“This letter is a lie,” Cheney said, noting the DOJ had told Trump “exactly the opposite” of what Clark wrote.

The third hearing will reveal firsthand how top officials in the DOJ threatened to resign and confronted Trump and Clark in the Oval Office, Cheney said.

She also said that “multiple other Republican congressmen also sought presidential pardons for their roles in attempting to overturn the 2020 election.” She named Rep. Scott Perry, R-Pa., who allegedly tried to get Clark promoted and has refused to testify before the committee.

The fourth hearing will center on how Trump tried to get his own vice president, Mike Pence, to reject key Electoral College votes when he presided over Congress on Jan. 6, 2021.

“You will hear this in great detail from the vice president’s former general counsel. Witnesses in these hearings will explain how the former vice president and his staff informed President Trump over and over again that what he was pressuring Mike Pence to do was illegal,” Cheney said.

That hearing will also delve into the actions of John Eastman, an attorney who was involved in Trump’s efforts, Cheney said. She also displayed a letter to Eastman from Pence’s chief counsel, Greg Jacob, who wrote on the day of the riot: “Thanks to your bullshit, we are now under siege.”

In the fifth hearing, the committee will parse how Trump “corruptly pressured state legislators and election officials to change election results,” Cheney said. That includes Trump’s call to Georgia election officials, asking them to “find” 11,780 votes, the number that Trump thought he needed to win the state.

The final two hearings will take in place in June. They will focus on how Trump “summoned a violent mob and directed them, illegally, to march on the U.S. Capitol,” and then “failed to take immediate action to stop the violence” once it was underway, Cheney said.

The hearings represent the initial findings from the committee’s investigation, which is ongoing. The panel is required to issue a final report and make recommendations on its findings. Thompson has indicated that report may arrive by the fall.

It was another ugly week for stocks, but we're still buyers — here's why