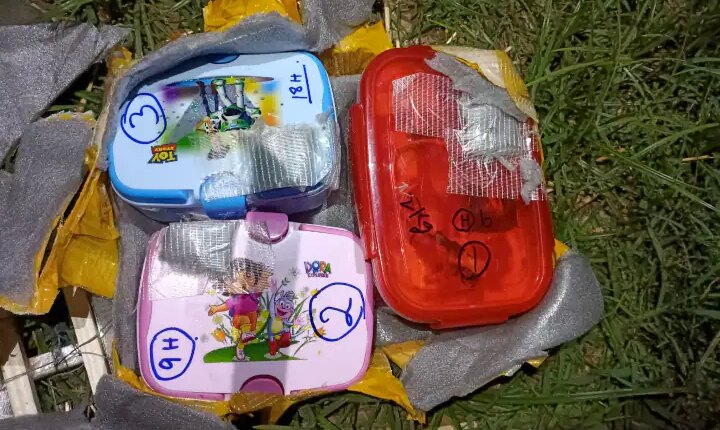 Magnetic IEDs Recovered: Three tiffin boxes recovered from the shot down drone in Akhnoor sector of Jammu have once again exposed the traces of Pakistan’s dangerous drone plan. The terrorists sent IEDs to the children’s tiffin boxes. Through drones, these tiffin box IED bombs were sent from across the border to incite terror in India and snatch innocent lives.

Is ISI’s L-Date unit behind the drone plan?
According to intelligence sources, ISI’s unit named L-Date or Lahore Detachment is executing this nefarious plan of Pakistan. This unit not only plays a role in carrying out this plan of drone delivery. Rather, it is coordinating a network of Kashmiri terrorists and Khalistani separatists against India. Sources reveal that in the last few years, the number of Pak Army officers has been increased in this detachment, but its deployment in the border areas with India has also increased.

According to intelligence reports, the same L-Date was behind the rocket attack carried out by RPGL on the Intelligence Headquarters of Punjab Police in Mohali on 9 May. L-Date had sent this rocket launcher across the border. Although according to intelligence sources, the target of the attack was something else, but in a hurry, the terrorists targeted the police building. The people of this unit work in the delivery of weapons and technology changes in drones to dodge security circles from drone operations.

During the last 6 months, more than 8 drones sent from Pakistan have been shot down by BSF personnel in the areas along the International Border on Punjab and Jammu and Kashmir. Apart from this, many such cases have been registered in which the delivery of weapons and drugs made from drones was recovered. The recovery of IED bombs from three tiffin boxes in Jammu’s Akhnoor area on Tuesday also happened during the search operation after the drone movement.

The graph of recent drone seizures of weapons, explosives and drugs suffices to show that L-Date’s network is increasingly engaged in carrying out nefarious designs.

Not only this, the technical investigation of the downed aircraft also revealed evidence that many of these drones were flown from Indian territory and sent across the border. Later, he was brought back from Pakistan to India after loading a consignment of drugs. An investigation into the flight path of a drone recovered from a field in the border area in early March 2022 also revealed further evidence of such a conspiracy.

Pakistan is getting help from China!
In fact, during the last few years, Pakistan used the drone plan as a weapon to dodge India’s increasing vigil on the border. Where Pakistan used the help from China, the world’s largest drone manufacturer. At the same time, DHA has raised a new plant of drone professionals in educational institutions like Sufa University, National University of Science and Technology, Ghulam Ishaq Khan Institute of Engineering Sciences and Institute of Space Technology.

Drone seizures at the border show that models like MATRICE-300-RTK and MSTRICE-600-RTK of Chinese company DJI are used in most major cases of arms delivery to drug smuggling. These models are easily available in the market as well as online stores.

According to intelligence sources, there is a deliberate use of such drones which are easily available in the market so that even if caught, their targets cannot be linked to the Pak Army. However, the technical investigation report of the downed drones states that some changes are also being made to reduce the noise of the drones and increase their pay-load capacity.

Terrorist bosses sitting in Pakistan are now changing their working model at the behest of ISI. Due to the increasing strictness and restrictions of the FATF on Pakistan’s terrorist business, the emphasis is on methods that do not reveal identities. Due to this, special emphasis is being given on the game of delivery through drones to the sleeper cell and OGW (over ground worker) network within India.

Army and security forces are working fast to cut this bet of Pakistan. Recently, BSF chief Pankaj Singh has said that effective techniques are being developed against drones and underground tunnels. So that the delivery of arms and drugs for terrorist activities can be effectively checked.

Keep in mind that along with increasing the deployment of more security forces drone killer system, the soldiers on the ground are also engaged in alerting and prepared about drone infiltration and retaliation.