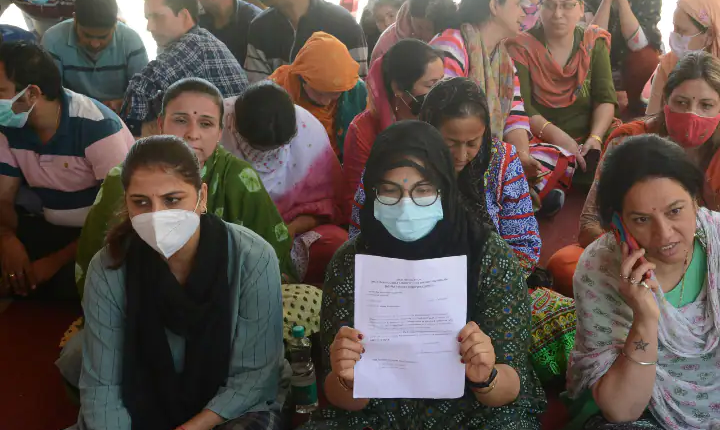 Target Killing In J&K: Terrorists killed two people in Jammu and Kashmir in 12 hours. Terrorists shot two non-Kashmiris in Badmam, in which Dilkhush Kumar, a resident of Bihar, has died while another person has been injured. On the other hand, terrorists shot dead a bank manager in Gulgam.

After the terrorist attacks in Jammu and Kashmir, migration is being seen once again. A large number of employees reached Jammu from the Kashmir Valley late in the night. Kashmiri Pandits and employees demanded protection from the government. On the other hand, in Kashmir, the effect of gunshots has started showing on faith. After increasing incidents of target killing in the valley, it has been decided to postpone the Kheer Bhavani Yatra for the time being in view of the demand of Kashmiri Pandits.

Migration in the valley after target killing

The preparations for the Kheer Bhavani Yatra were about to start from June 8. The cleanliness of the temple also went a lot, but the protest against the killing of the employees in the temple premises continued continuously. Leaving aside the last two years, the Yatra has been going on continuously since its inception in 1994. But Kashmiri Pandits believe that now the situation has worsened. At present, Kheer Bhavani Yatra has been postponed but Amarnath Yatra is also to be held from June 30. In such a situation, the safety of the devotees has become the biggest concern of the administration. Therefore, three layer security arrangements have been made for the Amarnath Yatra.

Late on Thursday evening, terrorists targeted two non-local laborers in Budgam. Out of which one worker died. The killed laborer is a resident of Bihar while the second laborer injured in the attack is a resident of Gurdaspur in Punjab. Both the migrant laborers used to work at a brick kiln in Chadoora village of Budgam district. According to the police, the terrorists attacked him while he was working.

Soon after the incident, both the laborers were taken to a nearby hospital where Dilkhush Kumar of Bihar was declared brought dead while the other laborer is undergoing treatment. Earlier yesterday morning, bank manager Vijay Kumar was murdered in Kulgam. Vijay Kumar was a resident of Rajasthan but was working in Kashmir for the last 3 years. This is the second incident of murder of an innocent in Kulgam in just 48 hours.

read this also: J&K: Amit Shah in action regarding the situation in Jammu and Kashmir, the second important meeting on target killing today, the Home Ministry may take a big decision