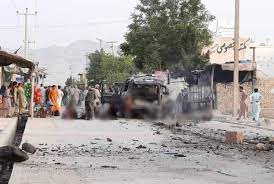 Blast In Jammu Kashmir: There has been an explosion inside the vehicle in Sedow area of ​​Shopian district of Jammu and Kashmir. In this blast, 3 soldiers of the army have been injured, after which they have been admitted to the hospital. On this matter, the IGP of Kashmir says that there has been an explosion in a private vehicle in which 3 soldiers have been injured and the soldiers have been admitted to the hospital. He said that nothing can be said right now whether this explosion was due to the grenade or IED already installed inside the vehicle or whether it was due to battery failure. At present the investigation is going on.

It is feared that the IED plant was already installed in this vehicle. However, investigation is going on and tampering with the battery is also being investigated.

Terrorists had targeted a civilian only yesterday

Earlier on Wednesday in Shopian district, terrorists shot a civilian near his residence in which he was injured. The incident took place in Keegam area of ​​Shopian district. The incident took place at 8:45 pm near the residence of Farooq Ahmed Sheikh. The injured has been admitted to a hospital in Pulwama where his condition is said to be stable.

Terrorists are doing target killing in the valley

Terrorists have started targeting civilians this time. For the last several months, he has been carrying out target killing by targeting civilians. Take the latest case of Tuesday itself when a female teacher living in Samba district of Jammu region was targeted. Before that, terrorists entered a liquor shop in Baramula and threw a grenade in which one person died. So on May 24, a policeman was killed by entering his house. After that TV’s artist Amrin Bhat is murdered.