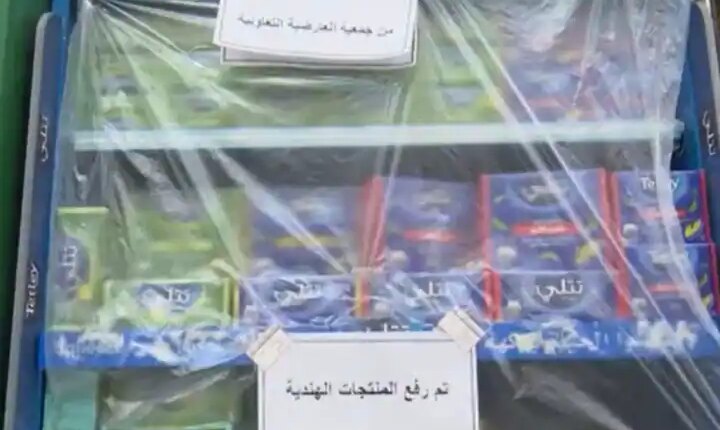 Remarks On Prophet Mohammad: A purported video of a notice put against Indian products at a department store in Kuwait is going viral on social media. In another video, Indian products are being removed from the store. It is being told as an action taken against Prophet Mohammad by expressing displeasure over the remarks of BJP spokesperson Nupur Sharma and Naveen Kumar Jindal. According to the news agency AFP, the workers of the Al-Ardiya Co-operative Society store have removed Indian products from the store in protest against the remarks made against the Prophet Muhammad.

In a video in a supermarket just outside Kuwait City, shelves of rice sacks, spices and chillies are covered with plastic. At the same time, it is written in Arabic on them that we have removed Indian products. After the statement of Bharatiya Janata Party spokesperson Nupur Sharma, Muslims have expressed strong anger. ABP News does not certify the veracity of these videos. But it is so clear from the video that the irresponsible remarks of BJP leaders have given the anti-India elements a sitting opportunity. Saudi Arabia, Qatar and other countries in the region as well as Cairo’s Al-Azhar University have also condemned the BJP spokesperson’s remarks.

At the same time, diplomatic difficulties have also been created for India. In such a situation, the staff of the Central Government and especially the Ministry of External Affairs is now busy in repairing the damage and repairing the relationship. Meanwhile, the Secretariat of the OIC, an organization of Islamic countries with a strong lobby of Pakistan, tried to name the attempts to create an anti-Muslim environment in India, citing the remarks of BJP leaders against the Prophet Mohammad. This organization of 57 Islamic countries of the world, citing other matters ranging from the hijab controversy, also expressed concern about the safety of Muslims in India.

At the same time, India also gave a strong reply on this matter. India has called the comments of the Organization of Islamic Countries OIC on the Nupur Sharma case, as unnecessary and small thinking by the Ministry of External Affairs. Foreign Ministry spokesperson Arindam Bagchi made it clear that India respects all religions. Some people made derogatory tweets and comments against a religious personality. This is not the view of the Government of India in any way. The concerned organizations have taken strict action against those making objectionable remarks.

Nupur Sharma has been suspended by BJP

Let us tell you that for the controversial remarks on Prophet Muhammad, BJP had suspended party spokesperson Nupur Sharma from primary membership for 6 years on the previous day. Apart from this, Naveen Kumar Jindal has also been expelled from the party. Naveen Kumar Jindal is the media head of Delhi BJP. This whole matter started when Nupur Sharma participated in the debate of a private channel on 27th May. During this Gyanvapi Mosque The controversy about (Gyanvapi Mosque Dispute) was being discussed. During the debate, Nupur Sharma had allegedly made derogatory remarks against Prophet Muhammad. After this Nupur’s video went viral and accused her of insulting the Prophet.

Sidhu Moose Wala Case: Is the person behind the murder of Moosewala a fan? selfie taker arrested

Passenger Vehicle Sales Data: In May 2022, passenger vehicles were sold more than the previous year of Corona in May 2019, but two wheeler sales did not pick up the pace, know why