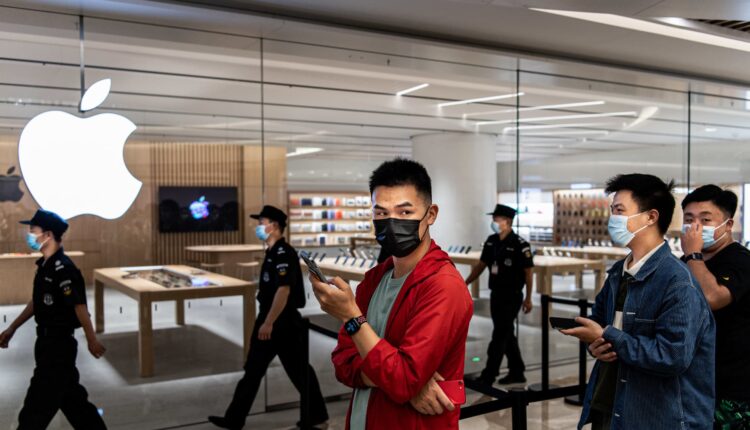 Apple opened its 54th flagship store in Greater China in the city of Wuhan in May. The iPhone company warned in late April that supply chain disruptions from China’s Covid controls would likely hurt sales in the current quarter by $4 billion to $8 billion.

BEIJING — Apple’s supply chain has brighter prospects than Android’s when it comes to recovering from the shock of China’s latest Covid controls, Credit Suisse analysts said in a report this week.

Shanghai, a port city in a high-end manufacturing region, began to reopen on June 1 after about two months of lockdown to control a flare-up in Covid cases. Nearby cities also suspended business intermittently to control the spread of Covid.

“Overall production of hardware could gradually resume to normal levels in June/July, with a brighter outlook for Apple’s supply chain than Android, while semiconductor would see more demand problems than supply,” Credit Suisse research analyst Edmond Huang and a team said in a report Monday.

“Our checks suggested the iPhone 14 build schedule remains the same, but initial production will be smaller which may be because of certain model production delays or some parts/chips shortage,” the report said. “We think the overall production orders of new models will stay similar to last year but the final production volume may vary on supply disruption.”

Apple did not immediately respond to a CNBC request for comment. Greater China, including Hong Kong, accounts for about 19% of the company’s sales.

Last week, iPhone supplier Foxconn said the impact of China’s Covid controls wasn’t as bad as expected, and that the company’s full-year outlook was better than what was expected at the beginning of the year.

Foxconn, also known as Hon Hai, said that operations were normal in important areas of production in mainland China, where the company has more than 30 sites. However, Foxconn said, since the Covid situation is likely to persist, the company plans to improve its ability to operate within a bubble.

Local authorities in China have allowed manufacturers to operate in Covid-restricted areas if the factories keep workers on-site. However, businesses have said travel restrictions have kept trucks from transporting parts between factories and customers.

“We believe Apple’s supply chain has higher flexibility vs. Android, as key [Apple] assembler Hon Hai has a much diversified capacity allocation,” Bank of America analysts wrote in April.

Just 5% of Hon Hai’s capacity is in the eastern city of Shanghai and the nearby Jiangsu province, and 10% to 20% in the “Greater Bay Area” around Hong Kong and Shenzhen, the analysts said, noting additional capacity in two other regions of China, as well as overseas.

Foxconn didn’t immediately respond to a CNBC request for comment.

In contrast, 80% of Android production capacity is in the Greater Bay Area and east China, especially Shanghai and Suzhou in Jiangsu province, the Bank of America report said.

Android is an open-source mobile operating system developed by Google that is the base for many popular Chinese smartphone brands such as Oppo and Xiaomi.

But both the Bank of America and Credit Suisse analysts said the greater problem for Android suppliers is their reliance on the China market and falling domestic demand for smartphones.

Smartphone shipments fell 18% in mainland China in the first quarter from a year ago, worse than a global decline of 11%, according to Canalys, which noted that the China market has underperformed for nearly three years.

Apple held on to 17% year-on-year growth in mainland China shipments for the quarter, while brands like Oppo and Vivo that had larger market share saw shipments plunge by 44% and 34%, respectively, Canalys said. Honor, a spin-off from Huawei, saw shipments triple in the first quarter from last year’s low base.

“The outbreak of the Omicron COVID-19 variant and strict lockdowns in major cities from February cast a shadow over the consumer market, which has yet to recover from last year’s weakness,” Canalys analyst Toby Zhu said in a release. “In response to the sudden retail closures and logistics delays, vendors must adopt a more cautious approach to stock allocation, which will inevitably affect sell-in in the short term.”