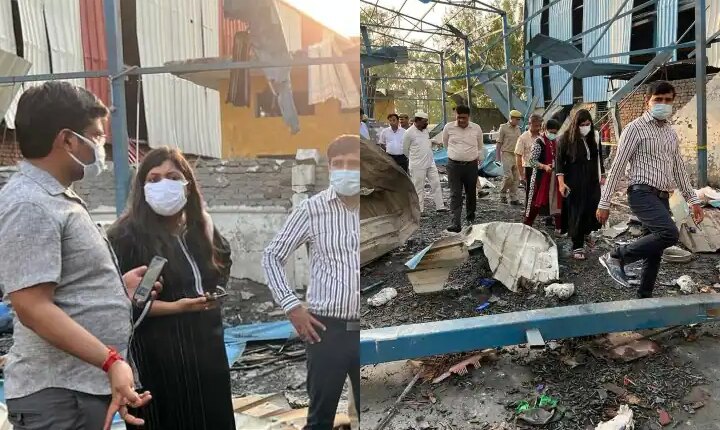 Hapur Factory Blast: So far 13 laborers have lost their lives in the blast that took place in Dhaulana, industrial area of ​​Hapur, UP, while more than 15 laborers are still fighting a war between life and death. The injured have been admitted to different hospitals in Delhi, Meerut, Ghaziabad. But after this incident there are many questions which the administration has to answer.

It is being told that this accident happened in a factory named Ruhi Industries. The license of this factory was taken a year ago by a person named Dilshad, but interestingly, in whose name the license was given, he was not running the factory, but Dilshad had given the factory on rent to a person named Wasim. Wasim was running this factory. Wasim also suffered injuries in the blast.

Did the district’s DM Medha Rupam say?
Talking to ABP News, District DM Medha Rupam admitted that the license to manufacture electronic equipment was taken in this factory, but something else was being made in the factory. However this is a matter of investigation. The forensic team has taken many samples from the blast site, after which it will be known that what was being made in the factory.

When the team of ABP News inspected the site, they found the shells of firecrackers filled in children’s guns. Even inside the factory, bundles of firecrackers were lying busy. The worker working in the factory also confessed to manufacturing firecrackers in the factory. The brick walls built in the factory, and the tin shed on top were blown up. Along with this, the windows of the buildings within the surrounding 200 meters radius were also shattered. This gives an idea of ​​how strong the blast was.

Saw Mehtab’s eyes in the factory blast
Mohammad Mahtab, who worked in the factory itself, had left the factory shortly before the blast and went to get food for his laborers friends. But after a while, his laborer friend got a call that there has been an explosion in the factory, all are dead. Mehtab reaches the factory on the run and the friends for whom he had bread in his hands were now lying on the ground covered in blood.

However, after yesterday’s blast, now the administration team has woken up. Hapur DM Medha Rupam came out with full force to inspect the other factories in the industrial area of ​​Hapur. Along with the DM, the Chief Fire Officer of the area, officers of the Labor Department were also present. DM Medha Rupam told ABP News that there are more than 2000 factories here.

What is the administration doing after the blast?
Our team will go to the factory and check the required documents. Along with this, it will also be investigated that the person to whom the license has been given, should also be the operator of the factory. On yesterday’s accident, the DM said that the police have registered a case against the accused. The search is on in whose name the factory license was given, as well as the factory, which Wasim was running, is also being searched.