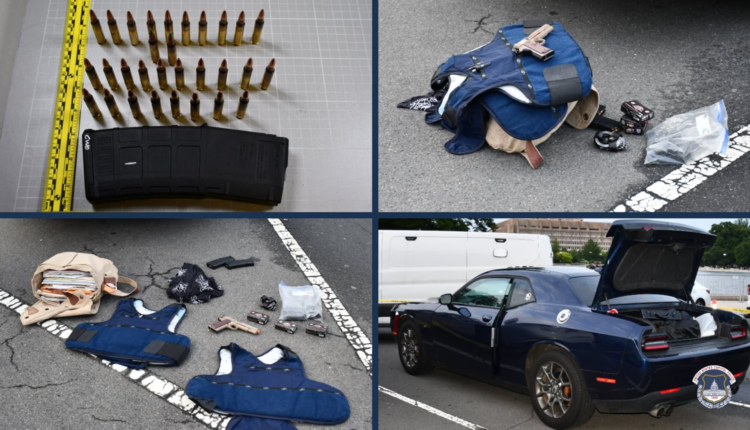 A retired New York City police officer was arrested Friday morning outside of the U.S. Capitol after being found in possession of a fake law enforcement badge, a BB gun, body armor, ammunition and high-capacity magazines, Capitol police said.

The ex-cop, 53-year-old Jerome Felipe of Flint, Michigan, was spotted by a Capitol patrol officer just before 5 a.m. ET parked in a 2017 Dodge Charger near Peace Circle, on the west side of the Capitol in Washington, D.C., authorities said.

Felipe presented the Capitol police officers who spoke with him a fake badge that said, “Department of the INTERPOL,” according to Capitol police.

Interpol is the international police organization.

“Felipe also made a statement that he was a criminal investigator with the agency,” Capitol police said.

After he gave police permission to search his vehicle, officers found a BB gun, two ballistic vests, several high-capacity magazines and other ammunition inside.

Felipe was charged with unlawful possession of high-capacity magazines and unregistered ammo, according to police, who said that investigators are trying to determine why he parked near the Capitol.

A spokesperson for the New York Police Department, when asked about Felipe, told CNBC in an email, “The individual retired in 2018.”

“We are fully cooperating with the US Capitol Police investigation,” the spokesperson said.

An online database maintained by the New York State Division of Criminal Justice Service includes information about Felipe being removed from the NYPD for cause in November 2018. It also says his removal was pursuant to a regulation related to “an employee’s resignation or retirement while a disciplinary process has commenced.”

The Capitol was stormed on Jan. 6, 2021, by a mob of supporters of former President Donald Trump. They disrupted lawmakers as they confirmed President Joe Biden’s election during a joint session of Congress.

More than a dozen active-duty and retired police officers, some of whom were NYPD veterans, were arrested for participating in the invasion of the Capitol that day.

Last month, a federal jury in Washington convicted former NYPD officer Thomas Webster of assaulting a District of Columbia police officer during the riot. Webster attacked the cop with an aluminum pole while holding a Marine Corps flag, authorities said.

Kohl’s sale negotiations could drag on for weeks, possibly longer