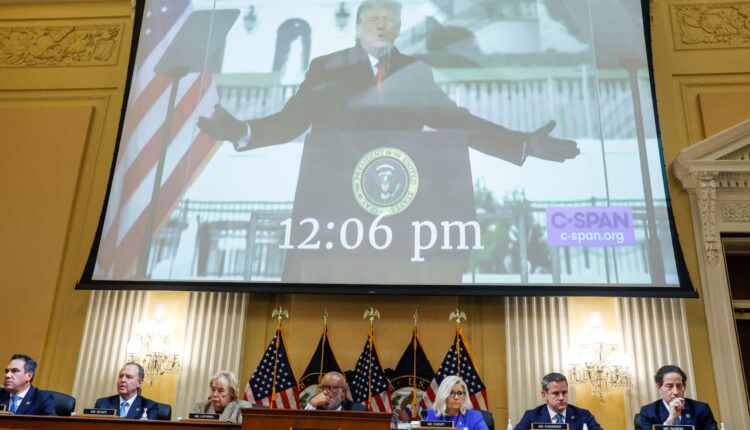 Former U.S President Donald Trump is seen on video during the hearing of the U.S. House Select Committee to Investigate the January 6 Attack on the United States Capitol, on Capitol Hill in Washington, U.S., June 9, 2022.

A former Fox News political editor who was fired by the cable network last year said Friday that he will testify Monday at the House select committee’s next hearing about the pro-Trump Jan. 6 riot at the Capitol.

Chris Stirewalt made the announcement on the Newsnation cable network, where he is the political editor. He said he couldn’t discuss what the testimony would be about.

His announcement came the morning after the committee’s first public hearing on the Jan. 6, 2021 insurrection, when hundreds of followers of then-President Donald Trump busted through doors and windows to invade the Capitol and delay Congress’s confirmation of Joe Biden’s victory in the 2020 election.

The next hearing is scheduled for 10 a.m. Monday and there are five more hearings planned after that. Fox News didn’t carry the hearing live Thursday night as other news and broadcast networks did. Instead, Fox aired two hours of commercial-free programming from right-wing commentators Tucker Carlson, who dismissed the hearing as “propaganda,” and Sean Hannity.

While Fox News did air live images from the hearing, Carlson and others spoke over it, and the camera often focused on the audience and not the footage of the attack on the Capitol. During the hearing, the committee displayed texts from Hannity to then-White House press secretary Kayleigh McEnany outlining a post-riot “playbook” for Trump.

Stirewalt came under fire from Trump and his supporters after the Fox News political desk was the first to call Arizona for Biden in November 2020. The state had a recent track record for voting for Republican presidential candidates, so the call stunned the political world and all but confirmed Trump would lose the 2020 election.

Stirewalt was fired in January 2021. Rupert Murdoch, who controls Fox News’ parent company, told The Washington Post that Stirewalt’s firing “had nothing to do with the correct Arizona call by the Fox decision desk.”

After Fox fired him, Stirewalt, without mentioning Fox News, said media “hype men” helped push the false narrative that the election was stolen from Trump.

“The rebellion on the populist right against the results of the 2020 election was partly a cynical, knowing effort by political operators and their hype men in the media to steal an election or at least get rich trying,” he wrote in a Los Angeles Times op-ed. “But it was also the tragic consequence of the informational malnourishment so badly afflicting the nation.”

Representatives for Fox News and the select committee didn’t immediately respond to a request for comment.

CNBC’s Kevin Breuninger and Brian Schwartz contributed to this report.