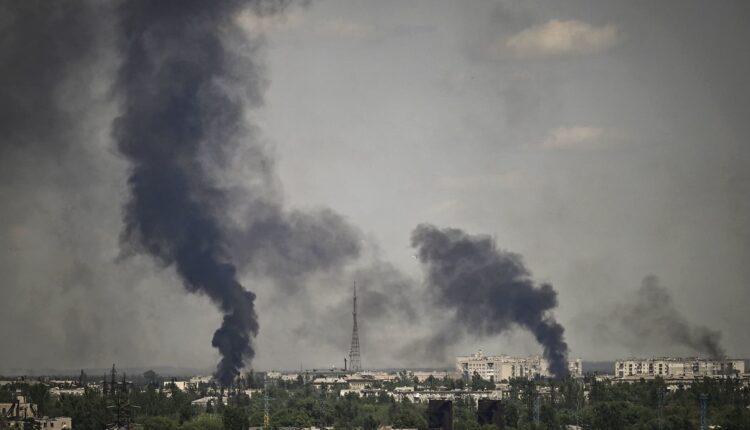 Heavy fighting between Ukrainian and Russian troops is taking place in the strategically important Donbas city of Severodonetsk.

Intense fighting is ongoing in the streets of a critical eastern Ukrainian city now at the heart of Moscow’s invasion, as Kyiv implored the West to deliver more weapons to hold off Russian forces.

In Severodonetsk, an eastern Ukrainian city that has become the focus of Russia’s advance in eastern Ukraine, there are likely many casualties on both sides, according to an update from the U.K. Ministry of Defence on June 11.

“Intense street to street fighting is ongoing and both sides are likely suffering high numbers of casualties,” the ministry said on Twitter. “Russia is massing fires with its artillery and air capabilities, in an attempt to overwhelm Ukrainian defences.”

However, the ministry said Russian forces have not managed to seize control of the south of the city.

Ukraine’s President Volodymyr Zelenskyy has said the battle for Severodonetsk may decide the outcome for the east of Ukraine. He described the fighting in the city in Ukraine’s Donbas region as “probably one of the most difficult throughout this war.”

The Donbas refers to two provinces, Donetsk and Luhansk, in the easternmost part of Ukraine. It’s a major strategic, political and economic target for the Kremlin.

“Very fierce fighting continues in Donbas,” Zelenskyy said in his nightly address on June 11. “Russia wants to destroy every city in Donbas.”

“The Ukrainian troops are doing everything to stop the offensive of the occupiers. As much as possible. As much as the heavy weapons, modern artillery — all that we have asked and continue to ask our partners for — allow them to,” he said.

Ukraine is pleading for faster and more deliveries of weapons from the West as the war in the east is primarily an artillery battle where the Ukrainians are badly outgunned, according to Reuters, citing the country’s officials.

“Everything now depends on what (the West) gives us. Ukraine has one artillery piece to 10 to 15 Russian artillery pieces,” Vadym Skibitsky, Ukraine’s deputy head of military intelligence, told Britain’s Guardian newspaper.

The country is now banking its hopes on rocket systems the U.S. and U.K. have promised to send.

The U.K. said earlier this week that it will send Ukraine multiple-launch rocket systems that can strike targets up to 50 miles away, in a coordinated move with the United States. Washington said it would supply Ukraine with High Mobility Artillery Rocket Systems, which can travel more than 43 miles.

Russia has attacked Ukrainian defenders with many such rocket systems, which have a longer range than artillery guns.

Why QuantumScape investors are still waiting for new EV batteries