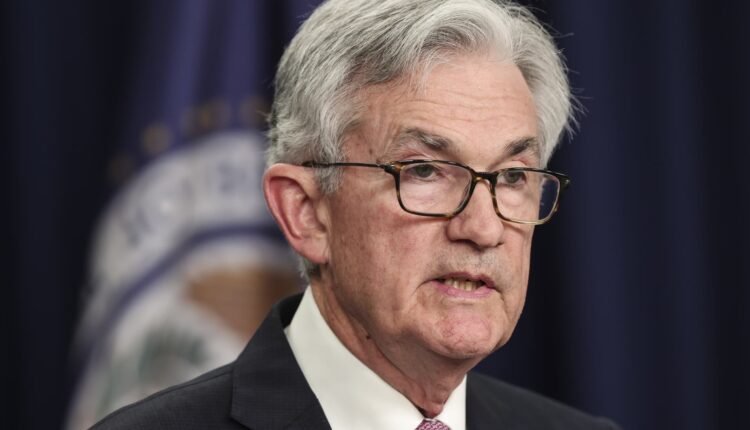 The week ahead may all come down to what Federal Reserve Chairman Jerome Powell has to say at 2:30 p.m. Wednesday afternoon.

Powell briefs the press following the central bank’s two-day meeting. The Fed is widely expected to raise its fed funds target rate range by a half a percentage point, but hot May inflation data has made markets nervous about whether the Fed could be even more aggressive or forecast a faster pace of future rate hikes.

The Fed will release new economic and interest rate forecasts at 2 p.m. ET. But it’s whatever Powell says about summer and autumn rate hikes that could help set the course for turbulent financial markets. Stocks and bonds have been volatile on investor fears that inflation may not be peaking, and the Fed’s rate hikes could cause a recession.

“I think really, the key thing is what Powell talks about in the conference and does he give anything that sounds like firm guidance for September,” said Michael Schumacher, head of macro strategy at Wells Fargo. “If he does, he would only do it if he was going to be hawkish, and if he doesn’t, people will view it as dovish.”

Schumacher said the fed funds futures market was reflecting a 56 basis-point hike for Wednesday. A basis point equals 0.01 of a percentage point.

After Friday’s much hotter-than-expected consumer price index for May, stocks cratered. For the week, the S&P 500 was down 4.5% as of late Friday afternoon.

“The market wants some clear and convincing evidence that the Fed can pull this off without starting a recession,” said Lori Calvasina, head of U.S. equity strategy at RBC Capital Markets. She said the market will take its cues from the economic data. “Maybe you’re stuck in purgatory for awhile.”

Friday’s inflation report was a negative catalyst for markets that were already pricing in worries about hot inflation and recession fears. CPI rose 8.6% year-over-year, well above the 8.3% expected by economists surveyed by Dow Jones.

That also added fuel to the debate about whether the Fed will consider a 75 basis-point rate hike and continue at a more aggressive rate hiking pace. Both Barclays and Jefferies changed their forecasts Friday to include a 75 basis-point hike for this coming Wednesday, though other economists still expect a half point.

Goldman Sachs economists Friday revised their forecast to include a half-point increase in September, on top of a half-point hike Wednesday and another in July.

JP Morgan economists expect Fed officials will provide new interest rate forecasts that reflect a faster pace of policy tightening, but they still see a half-point increase Wednesday. They expect the Fed’s median forecast for interest rates will show the fed funds rate at 2.625% at year end, well above a forecast of 1.875% in March.

“Chair Powell indicated a desire to guide expectations rather than surprise expectations. With little apparent appetite for an upside surprise, the course seems set for a 50bp hike next week,” the JP Morgan economists noted.

RBC’s Calvasina said she is waiting for Powell’s comments, and does not expect any surprises from the meeting. She said she was encouraged that some Fed officials seem ready to raise rates more rapidly earlier in the year, and leave themselves flexibility later on.

“I think the markets like that. It shows they’re not on autopilot,” she said. “It reflects that they don’t want to do too much damage to the economy. I would like to hear more commentary around that flexibility.”

Besides the Fed, there are a few important economic reports on the calendar next week, including the producer price index on Tuesday; retail sales Wednesday; housing starts Thursday, and industrial production Friday. All four reports cover May.

There are just a handful of earnings, including Oracle on Monday.

On Friday, the 2-year Treasury yield reached 3.05%, and the spread was only 10 basis points. If the 2-year were to move above the 10-year yield, the curve would be inverted, a recession signal.

Calvasina said the stock market, for now, is pricing in only a shallow recession. The S&P 500 has declined an average 32% in more traditional recessions, and in this cycle it has been down nearly 20%.

The strategist said there’s a 60% chance the market has already set a bottom. “I think valuations have gotten reasonable enough that you can go to your shopping list and buy the names you’ve been wanting to buy,” she said.

For stock investors, the Fed remains a challenge but small caps may be one area that has become beaten down enough.

“I think there’s a little bit of thirst out there and a little bit of hunger to chase down valuation opportunities, and I think small caps look as good as anything,” she said.