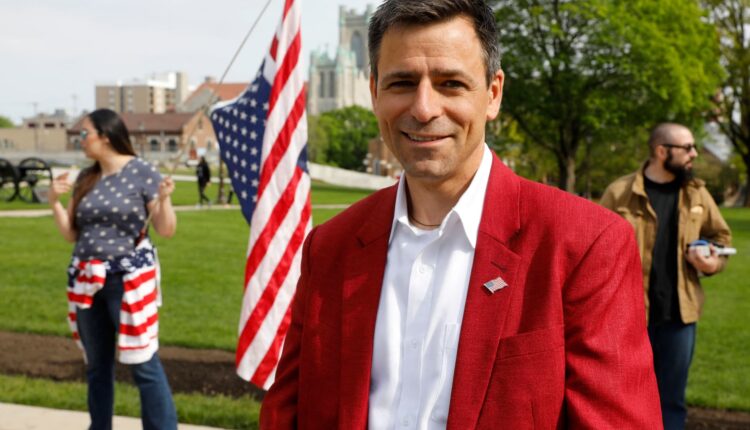 Ryan Kelly, Republication candidate for Governor, attends a Freedom Rally in support of First Amendment rights and to protest against Governor Gretchen Whitmer, outside the Michigan State Capitol in Lansing, Michigan on May 15, 2021.

WASHINGTON — A Republican candidate for governor in Michigan was arrested by the FBI on Thursday and charged with misdemeanors for participating in the violent riot at the U.S. Capitol on Jan. 6, 2021, NBC News has confirmed.

Federal agents raided Ryan Kelley’s home in Allendale, Michigan, on Thursday morning. NBC News received a tip about the raid, which was confirmed by a law enforcement official.

An FBI spokesperson later confirmed that a search warrant was executed at the home where Kelley was arrested. He faces four charges related to his alleged actions at the Capitol, including disorderly conduct and willfully injuring or attacking U.S. property.

Kelley in the past has acknowledged being in D.C. for the protests that preceded the deadly riot by supporters of then-President Donald Trump. But he said he never entered the Capitol.

A statement from an FBI special agent, released by Justice Department officials Thursday, includes and describes video footage and other images that indicate Kelley was involved in breaching the Capitol and directing others to participate.

“At approximately 2:20 p.m., Kelley continued to gesture to the crowd, consistently indicating that they should move towards the stairs that led to the entrance of the U.S. Capitol interior spaces,” the agent states.

Kelley’s arrest comes as the House committee investigating the deadly Jan. 6 riot prepares for its first public hearing Thursday night. And it follows the disqualification of at least two other leading GOP candidates for governor in Michigan, including front-runner James Craig, after they turned in allegedly fraudulent signatures to qualify for the August primary.

A battery shortage is hampering the U.S. switch to wind, solar power