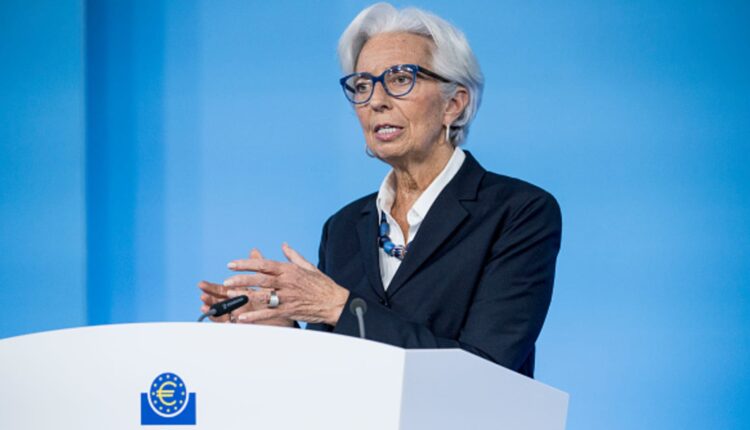 The European Central Bank faces a tough balancing act, with inflation running at record highs while the war in Ukraine casts a shadow over the growth outlook.

The European Central Bank on Thursday confirmed its intention to hike interest rates at its policy meeting next month and downgraded its growth forecasts.

Following its latest monetary policy meeting, the Governing Council announced that it intends to raise its key interest rates by 25 basis points at its July meeting.

The ECB expects a further hike at the September meeting, but said the scale of that increment would depend on the evolving trajectory of the medium-term inflation outlook.

For now, the interest rates on the main refinancing operations, marginal lending facility and deposit facility remain unchanged at 0.00%, 0.25% and -0.50% respectively.

“Beyond September, based on its current assessment, the Governing Council anticipates that a gradual but sustained path of further increases in interest rates will be appropriate,” the ECB said in a statement on Thursday.

Annual consumer price inflation across the 19-member euro area hit a fresh record high of 8.1% in May, but the ECB in its previous guidance indicated that a first rate hike would only come following the formal end of its net asset purchases on July 1.

Markets had been eagerly awaiting the meeting in Amsterdam on Thursday, the Governing Council’s first outside of Frankfurt since the onset of the coronavirus pandemic, for signs of how aggressive the shift in interest rates will have to be in the coming months.

Policymakers face the challenge of reining in inflation without compounding the economic slowdown resulting from the war in Ukraine and the associated sanctions and embargoes imposed between the European Union and Russia, previously a key source of energy imports for the bloc.

Economists have been torn on whether to expect hikes of 25 basis points or 50 basis points at the July and September meetings, with the ECB broadly expected to climb out of negative rate territory by the end of September from its current historic low of -0.5%.

Randall Kroszner, professor of economics at the University of Chicago and former governor of the Federal Reserve System, told CNBC ahead of Thursday’s meeting that it was “very important” that the ECB began to move on interest rates.

The U.S. Federal Reserve began hiking rates in March and implemented a 50 basis point hike in May, its largest in 22 years, with FOMC meeting minutes pointing to further aggressive hikes ahead. The Bank of England has hiked rates at four consecutive meetings to take the base interest rate to a 13-year high.

“Inflation is very high, it has the potential to become entrenched unless [ECB policymakers] move, and they move aggressively and make it clear that they are going to be moving further,” Kroszner told CNBC’s “Squawk Box Europe” on Thursday.

“They run the risk of inflation becoming entrenched, inflation expectations becoming unanchored, and having to raise rates much higher than they otherwise would have to.”

However, Kroszner expressed empathy with the difficult position in which the Governing Council finds itself, given Europe’s proximity to the war in Ukraine, interdependence with Russia and therefore state of economic peril.

“The concern that they have is that there are so many negative shocks coming from the war, sanctions, uncertainty, that the economy is going to slow down even without raising rates, so the inflationary pressures are going to come off,” he said.

“But there is sufficient inflationary pressure and sufficient risk of inflation expectations becoming unanchored, that they have really got to get moving.”