Drone In Valley: IED Has Been Deactivated And Diffused Through A Controlled Explosion 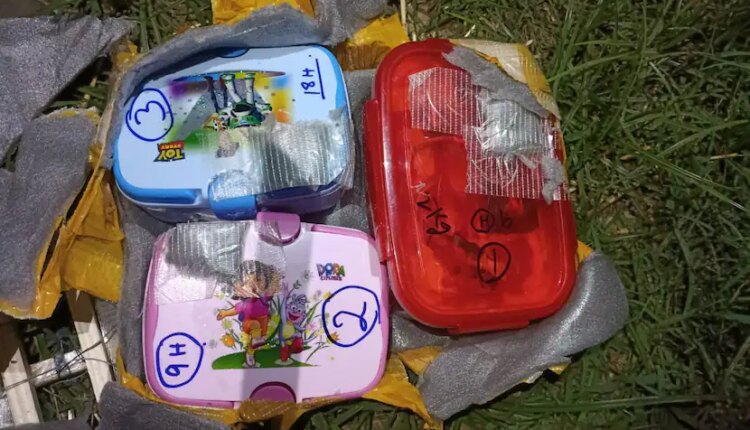 Drone in Kanachak Area: India’s neighboring country Pakistan is not deterring its nefarious antics. Pakistan keeps conspiring again and again through drones in areas adjoining the border in Kashmir and sometimes in Punjab and Rajasthan. The latest case is of Kanachak area of ​​Kashmir. Here BSF has recovered IEDs from inside the tiffin box, in which the timer was set for different times. However, BSF disabled him in time.

Three magnetic IEDs were packed inside the tiffin box

BSF had noticed a drone movement in Kanachak area at around 11 pm last night and opened fire on it. Police force was deployed soon after this incident and anti-drone SOP was followed. BSF has said that the payload attached to the drone was brought down. The payload consisted of three magnetic IEDs packed inside the children’s tiffin box, in which the timer was set for different times. The IED has been deactivated and a case has been registered.

The payload attached to the drone was brought down. The payload contained 3 magnetic IEDs packed inside the children’s tiffin boxes with a timer set to different timings. The IED has been deactivated and diffused through a controlled explosion. A case has been registered. pic.twitter.com/Mdw9eSry82

The suspected drone was flying about 800 meters in the air. Even before this, a drone was shot down by the BFF in Kathua district, in which something like a bomb was found. The local people there had seen the drone.

Police search teams are being sent regularly to the area due to frequent drone movements from across the border. The incident happened ahead of the start of the annual pilgrimage to the holy Amarnath cave in the South Kashmir Himalayas. Security arrangements have been tightened before this visit. Here from June 30, the 43-day Amarnath Yatra is going to start with two routes.