Dogra Employees Working In Panic Due To Target Killing In Kashmir 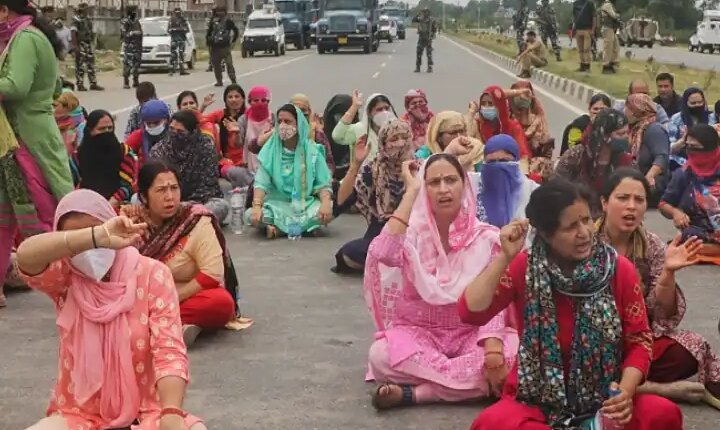 Target Killing In Kashmir: Government employees of the Hindu community staged a sit-in on the Tawi bridge for the third consecutive day on Saturday against the target killing and blocked the highway. He has also refused to go back to work in the Valley. The employees have demanded that they be shifted from Kashmir Valley and posted in their home districts of Jammu region.

Most of the Dogra employees working in Kashmir have returned to Jammu following the killing of teacher Rajni Bala by terrorists at a government school in south Kashmir’s Kulgam district on Tuesday. The protesters, under the banner of All Jammu-BEST Reserve Category Employees Association, marched from the Press Club to the Tawi Bridge on the highway and staged a sit-in at the site in the heart of the city.

What did the protesters say?
The protesters gave us justice and raised slogans of Rajni Bala Amar Rahe. He refused to go to his place of posting in Kashmir in view of the ongoing series of targeted killings of Hindus. Rashpal Singh, who was involved in the protest, said that due to the atmosphere created after the target killing, he would not return to Kashmir to do duty. He said that we would prefer to die here rather than return there again.

Panic among migrant Kashmiris due to target killing?
Meanwhile, under the Prime Minister’s Employment Package, a few thousand Kashmiri Pandit employees working in the Valley have returned to Jammu with their families. He says that there is an atmosphere of fear in the valley due to the recent target killings by terrorists. The pundits said that they are feeling relaxed after coming to Jagti township on the outskirts of Jammu. He told that in the last few weeks, nights have been spent in rented houses in Kashmir without sleeping due to fear.