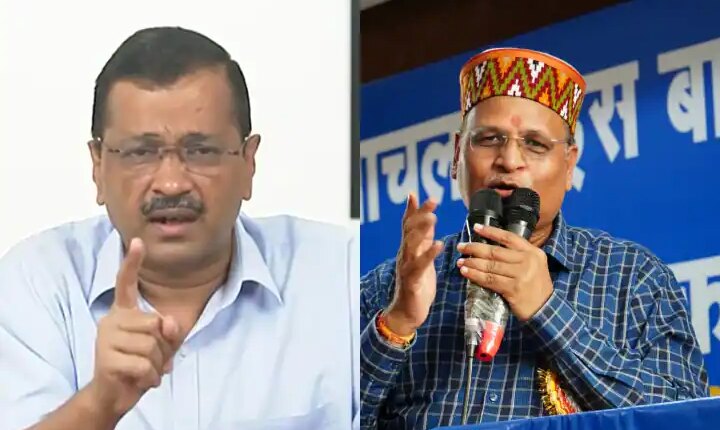 Arvind Kejriwal on Satyendar Jain: On the arrest of Delhi Health Minister and senior Aam Aadmi Party (AAP) leader Satyendar Jain, Chief Minister Arvind Kejriwal today said that the case registered against him is completely fake. He has been implicated in a false case. Jain was arrested by the Enforcement Directorate (ED) on Monday in a money laundering case. After this, he was presented in the Delhi court today. The court has sent him to ED custody till June 9.

Arvind Kejriwal said, “I have seen all the papers of Satyendar Jain’s case, the case is absolutely fake. We are staunchly honest and patriotic people, we consider corruption as a traitor to the country, can behead but will not do corruption.

He further said, “Just a few days ago, the whole country saw that in this way we sacked one of our own ministers in Punjab and sent them to jail. No one knew about his corruption. If we wanted, we could have suppressed the whole matter, but did not do this, we cannot betray the country, we cannot deal with our soul.

Aam Aadmi Party (AAP) national convener said, “Similar incident happened in 2015 also when I myself handed over the matter to CBI after sacking my minister, only then no one knew we could suppress the matter if we wanted.” Were. The whole world had not seen this level of honesty in politics.

Arvind Kejriwal said, “All the allegations leveled against Satyendra Jain are fake, the whole case is fake, he has been arrested only because of politics. If there was truth in his case even 1 per cent, then when would I have taken action.

He said, “Many of our MLAs have been booked in many false cases, all of them have come back out of court because in the end truth wins. They did not know how many cases against me, how many times they got raided and nothing was found. In the end, Satyendra Jain ji will also be left behind.

Kejriwal said, “Our party is a party following the ideals of Bhagat Singh. Bhagat Singh became a martyr for the country and truth. Going to jail for the sake of the country and the society is not a pollution, it is Bhushan. ”He said that I am able to understand what his (Satyendra Jain) wife and children must be going through at this time. I want to say sister-in-law, your husband is very courageous, children, your father is very courageous.

Asaduddin Owaisi: Now AIMIM will enter the electoral fray in Rajasthan too, Asaduddin Owaisi made a big statement regarding the video in Gyanvapi case