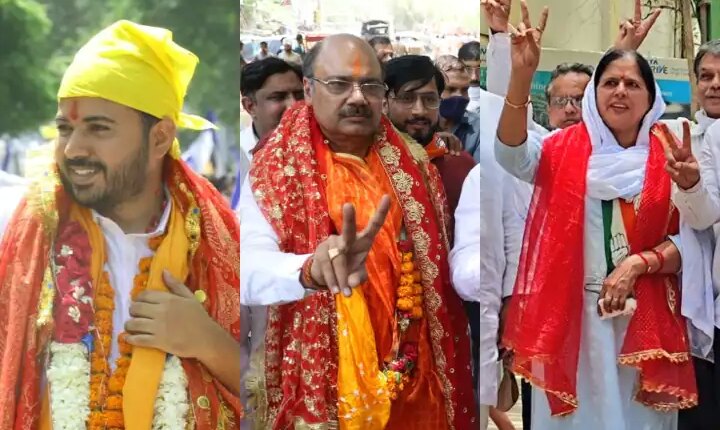 Delhi Assembly Delhi Bypoll: Raghav Chadha, who was the Aam Aadmi Party’s MLA from Rajendra Nagar seat, has moved to the Rajya Sabha. He has now become a Rajya Sabha MP from the Aam Aadmi Party, so the Election Commission is conducting by-elections on his vacant seat (Delhi Assembly By Polls). All the parties filed their nominations here on Monday. ABP News had a special conversation with the candidates of all the three main parties who reached Pusa in Delhi to file their nominations.

Former MLA of Rajendra Nagar, Raghav Chadha, who came to support Aam Aadmi Party’s candidate Durgesh Pathak, who is confident of victory, says that Durgesh Pathak will win from here with more votes than I had won in this seat. Chadha said that here the vote will be held on the name and work of Arvind Kejriwal. We have solved 90% of the water problem here in the last 7 years, our party will work towards it even further.

According to Chadha, people have come to know that if the work is to be done, then Kejriwal has to vote. BJP does not have a candidate for this seat. When he asked Sirsa for this seat, he refused. When Adesh Gupta was told, he also ran away, even Tajinder Bagga did not agree. This is my birth and birthplace.

What did the BJP candidate say?
At the same time, before the nomination of the BJP candidate, ABP News interacted with him. Rajesh Bhatia is the BJP candidate from here. He has been the former state general minister of BJP. Manoj Tiwari, who was the former state president, had given him the responsibility of the state general minister during his tenure. Bhatia says that people do not know Durgesh Pathak for good. They have no identity. They are seeking votes only in the name of Kejriwal? Are you an 18 year old kid? Aam Aadmi Party did not find any candidate in Rajendra Nagar? I have been a municipal councilor from here. I fought in my name.

I had built a mini stadium here, built lanes everywhere, honored the cleaning workers. I have a long list of works on the basis of which I am seeking votes. Bhatia said that we will make people aware about pollution here. I am promising a house where there is a slum. I will fight for Ayushman scheme, open gym and fight for clean water.

What did the BJP state president say?
Delhi BJP state president Adesh Gupta, who reached the road show and nomination center to strengthen his party’s candidate, says that we have fielded a local and humble candidate on this seat. The Aam Aadmi Party had to bring a candidate from Karawal Nagar because they have no candidate left from here. Kejriwal did not give houses to the slum dwellers, the problem of water is the biggest here.

Congress has made Prem Lata its candidate
The MLA from here was Raghav Chadha. 57 thousand crore rupees were given to the Jal Board from the Delhi government, where did it go? He did not do any development work. Bhatia was a corporation councillor, he has done various types of work like road construction work, park construction work. Congress has fielded Premlata for Rajendra Nagar by-election. Premlata has previously been a former councillor.

Keeping in mind that there is a good number of Punjabi voters in Rajendra Nagar seat, candidates have been fielded in the electoral fray. Elections will be held on the Rajendra Nagar assembly seat on June 23, the results of which will be declared on June 26.

Targeted Attack Budgam: Four Days After The Worker’s Murder, The Police Arrested The Kiln Owner, This Is The Allegation ANN

Mohalla Clinic: 100 New Mohalla Clinics Will Start In Delhi, Know What Benefits The General Public Will Be Able To Avail ANN