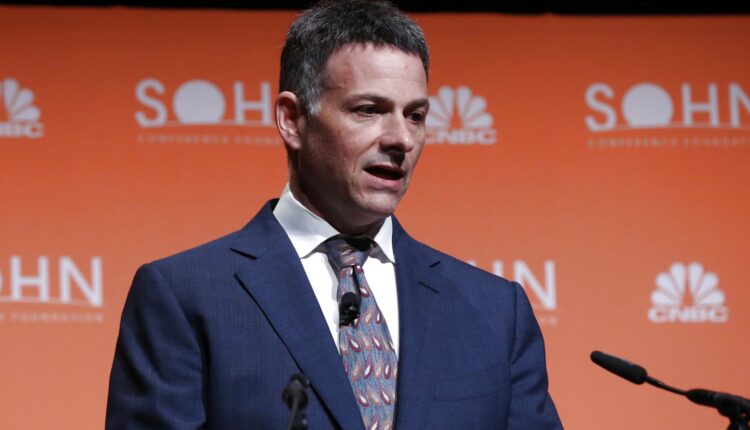 Greenlight Capital’s David Einhorn said he’s doubtful that the Federal Reserve will be successful in its battle against surging inflation, adding he sees a strong case for gold down the line. “The Fed is bluffing,” Einhorn said Thursday at 2022 Sohn Investment Conference. “Inflation ain’t going away so fast. The Fed doesn’t really have the tools to stop the inflation.” “It simply can’t do much more because it must undoubtedly ensure that the Treasury can fund itself. When the Fed has to choose between fighting the inflation and supporting the Treasury, I think it has to pick the Treasury,” Einhorn said. “At that point, it’s best to have some gold.” To tamp down inflation at a 40-year-high, the Fed has enacted two rate increases totaling 75 basis points, including a 50 basis point increase in May . A few Fed officials have floated the idea of implementing two more 50 basis point rate increases over the summer then taking a step back in September. Greenlight’s founder believes the Fed’s current tightening path is not remotely aggressive enough to fight price pressures, saying a neutral rate today would be about 7% with inflation running at about 8%. The investor believes at some point if rates continue higher because of the Fed’s actions, the central bank will back off its campaign since it will be raising borrowing costs for the government already $30 trillion in debt. “We’re now on a path to raise rates half a percent of the time until rates reach an arbitrarily determined neutral level for around two and a half to three and a half percent. This gentle response is akin to trying to clear your snow covered driveway with an ice cream scooper,” Einhorn said. Fed Chair Jerome Powell spent much of 2021 saying inflation was “transitory” and that it was likely to abate once Covid pandemic-specific factors such as supply chain problems and outsized demand for goods over services returned to normal. Einhorn believes that the Fed’s rate hikes might perversely increase the inflation the central bank tries to control as higher borrowing costs could worsen the supple-demand imbalance. “All the work to curtail inflation will have to come from the demand side.,” Einhorn said. “As a result, prices will have to go much higher to dissuade substantial consumption, as such inflation is likely to be much more persistent.” The star manager predicts that gold could emerge as the ultimate financial insurance for investors. “When countries don’t trust each other over bonds, and currencies, gold becomes the ultimate reserve asset. Gold is a percentage of total reserves remains staggeringly low,” Einhorn said. “The question is whether there’s enough gold to back the currency reserves? The answer is for the price of gold to go higher, perhaps much higher.”