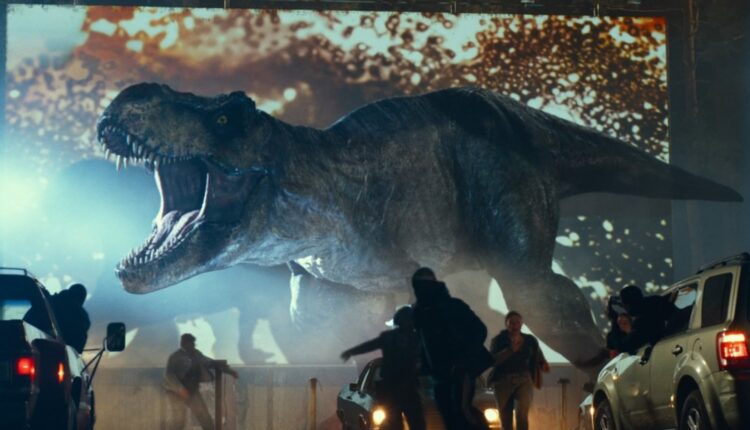 “Jurassic World: Dominion” may score the top spot at the domestic box office this weekend, but lackluster reviews and word of mouth could stall its potential haul.

“Inevitably, ‘Jurassic World: Dominion’ will make a fortune worldwide, since these films always do,” wrote Robbie Collin in his review of the film for the Daily Telegraph. “But in credibility terms, it’s an extinction-level event.”

The third and final film in the new trilogy of “Jurassic Park” films is the worst reviewed of all six films in the franchise, currently holding a 36% rating on review aggregator Rotten Tomatoes from 175 reviews.

While the Universal film is expected to tally around $125 million in ticket sales in the U.S. and Canada this weekend, poor audience reception could hamper its overall grosses in the coming weeks. Not to mention, the film faces steeper competition from other films, such as Disney and Marvel’s “Thor: Love and Thunder” in the coming weeks.

“Even with the original cast on board, there’s surprisingly little chemistry or humor, and the movie makes repeated pit stops to stress family values,” wrote Joshua Rothkopf in his review for Entertainment Weekly.

There’s wide consensus among critics that “Dominion” desperately wants to capture the nostalgia of “Jurassic Park” but that the stunning visual effects fail to make up for its missteps in storytelling and character development.

Here’s what critics thought of “Jurassic World: Dominion,” which arrives in domestic theaters this Friday:

“‘Dominion’ wants audiences to remember what they loved about the first film, yet without harnessing any of the joy or spectacle that made this series such a standout when it launched in 1993,” Bonaime wrote in his review for Collider.

“Instead, ‘Jurassic World: Dominion’ is an exhausting slog, a legacyquel that doesn’t seem to recognize where the power of that legacy comes from, and overarching idiocy that permeates every scene in the film,” he wrote.

Bonaime said the film attempts to pay homage to fans of the original “Jurassic Park” trilogy, which was released between 1993 and 2001, but fails to give its trio of Dern, Neill and Goldblum anything interesting to tackle.

“Instead of pitting this iconic trio amongst dinosaurs once more, ‘Dominion’ mostly faces them off against giant locusts, which is about as compelling as it sounds,” he wrote.

Read the full review from Collider.

“‘Dominion’ is the final entry into a trilogy that, at no point, ever knew what it was doing,” Loughrey wrote in her review for Independent. “It’s been like watching a cook completely butcher a recipe, before manically pouring in spice after spice to try and fix it.”

Loughrey said there were “crumbs of ideas for better Jurassic films that no one ever had the boldness of vision to commit to.”

She pointed to the “Jurassic World” villain played by Vincent D’Onofrio who threatened to militarize velociraptors.

“Dinosaurs with guns? Cool, they should have done that,” she wrote.

“Mutant dinosaurs? Cool, they should have done that,” she wrote.

“Dominion” seems to follow the same pattern. The trailer teases that dinosaurs have been unleashed from captivity and now roam among us. However, the film spends little time on this concept, instead exploring larger-than-usual locusts destroying crops and a rescue operation after Maisie (Isabella Sermon), a human clone of the daughter of one of Jurassic Park’s original founders, is kidnapped.

“The only way to really enjoy ‘Dominion’ is to hold tight to those small sparks of imagination,” Loughrey wrote.

“There’s a car chase in the middle of Malta where a velociraptor gets absolutely decked by a metal pole,” she wrote. “Some genetic fiddling introduces the feathered and more scientifically accurate Therizinosaurus to the pack — a nightmarish creature with ‘Babadook’ claws. DeWanda Wise, as pilot Kayla Watts, slips so easily into the Han Solo-esque, reluctant hero role that it’s frustrating she’s been introduced so late in the trilogy.”

Read the full review from Independent.

“The point of entertainment is not to wear you down, but you’d never know it from watching ‘Jurassic World: Dominion,’ directed by Colin Trevorrow,” Zacharek wrote in her review for Time.

She noted that the film kicked off in a “reasonably promising fashion” but quickly becomes “wearying” after the first hour rolls by.

“There’s so much plot, so many characters, so damn much Chris Pratt, that the dinosaurs end up taking a backseat,” Zacharek wrote. “They’re the forlorn underdogs of their own film.”

“With so many humans bumbling around, there’s barely room for dinosaurs,” she added. “Some highlights include a duo of apex predators going at it in a fight-to-the-death for universal superiority, though really, they’re tussling over one tiny deer carcass.”

Read the full review from Time.

“‘Jurassic World: Dominion’ is being billed as the ‘Conclusion of the Jurassic Era’ and that will undoubtedly be the case,” Lussier wrote in his review for Gizmodo. “Mostly because it proves beyond a shadow of a doubt that this once-beloved franchise should become extinct.”

Lussier said the film’s greatest sin is that it is “generally uninteresting and boring.”

Like other critics, Lussier praised the film’s visual effects, noting that “every second a dinosaur was on screen, I believed it was a dinosaur.” But he too said that wasn’t enough to save the film. He noted that as the final chapter of the sequel trilogy, the film is “painfully familiar,” seeming to follow the same path as previous installments without elevating the material.

“The first ‘Jurassic Park’ worked because it was simple, relatable, and smart,” he wrote. “You wanted to be in that place, with those characters, and everything made sense.”

“Now, five sequels later, there hasn’t been one film that comes close to capturing that magic,” he added. “They’re all either too complicated or too similar. ‘Jurassic World: Dominion’ is both of those things, as well as being a narrative cesspool, making it, without a doubt, the worst Jurassic movie yet.”

Read the full review from Gizmodo.

Disclosure: Comcast is the parent company of NBCUniversal and CNBC. NBCUniversal is the distributor of “Jurassic World: Dominion” and owns Rotten Tomatoes.