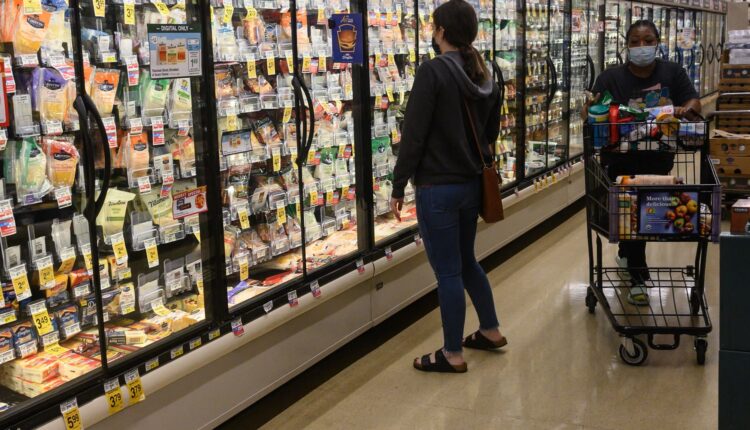 For many Americans, the pandemic-induced slowdown offered a rare opportunity to better their financial standing.

Government stimulus checks and fewer opportunities for spending drove the personal savings rate to a level not seen since World War II, with many consumers using the cash they had on hand to pay down debt — primarily their credit card balances, which have the highest interest rates, averaging more than 16%.

Altogether, consumers paid off a record $83 billion in credit card debt during the pandemic, but the recent spike in prices for gas, groceries and housing, among other necessities, is causing most of them to lean on their credit cards once again.

Meanwhile, credit card balances are also up year over year, reaching $841 billion in the first three months of 2022, and are expected to keep heading higher, according to a separate report from the Federal Reserve Bank of New York.

The rise in credit card borrowing, together with auto loans, student debt and mortgages, has now propelled total household debt to a record $15.84 trillion.

“A big drop and then a big rise”

“We got our new record — it took just 11 months for revolving debt to bottom out and then 15 months from there to climb back to a new high,” said Ted Rossman, a senior industry analyst at CreditCards.com.

“Following the financial crisis, it took nearly 10 years from peak to peak,” Rossman said. “This has definitely been a V-shaped curve — a big drop and then a big rise.”

“But it’s not all bad news,” he added. “Some of this reflects rising consumer spending, which is good for the economy.”

Still, credit cards are already one of the most expensive ways to borrow money.

As the Federal Reserve raises interest rates to tame inflation, which is running at its fastest pace in more than 40 years, carrying a balance will soon cost even more.

Since most credit cards have a variable rate, there’s a direct connection to the Fed’s benchmark. As the federal funds rate rises, the prime rate does, as well, and credit card rates follow suit. Cardholders usually see the impact within a billing cycle or two.

Annual percentage rates are currently at 16.61%, on average, but may be closer to 19% by the end of the year — which would be an all-time record, according to Rossman.

If the APR on your credit card rises two percentage points from where it stands now, it will cost you another $832 in interest charges over the lifetime of the loan, assuming you made minimum payments on an average $5,525 balance, he calculated.

Also, it would take more than 16 years to pay off.

“The biggest problem isn’t the monthly payments, it’s the cumulative effect of paying a hefty rate over a long period of time,” Rossman said.

If you’re carrying a balance, try consolidating and paying off high-interest credit cards with a lower interest home equity loan or personal loan or switch to an interest-free balance transfer credit card, he advised.

The stocks in this elite group, including Target, consistently hike dividend payouts and beat the market