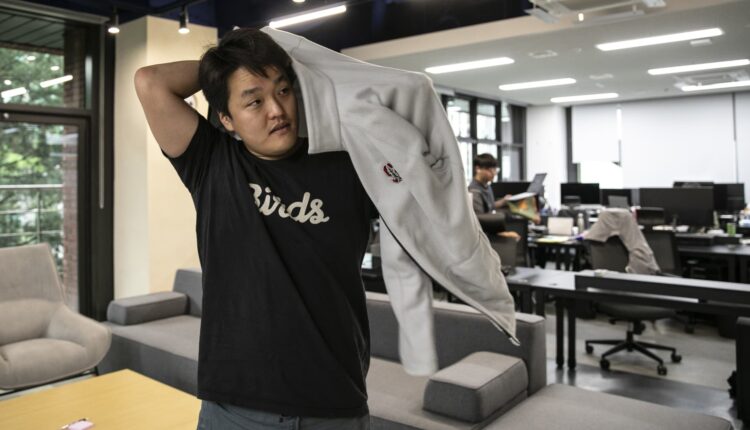 Do Kwon, the 30-year-old South Korean founder of a $60 billion stablecoin project that imploded last month, has a knack for convincing people to buy what he’s selling. Most recently, Kwon sold his vision of a new kind of payment system that would upend the status quo and replace the world’s currencies.

TerraUSD (also called UST) and its sister token, luna, moved in lockstep. UST functioned as a U.S. dollar-pegged stablecoin meant to replace global fiat transactions, while luna helped UST keep its peg and earned investors a killing as it appreciated in value. (In 2021, luna was up 15,800%.) Traders were also able to arbitrage the system and profit from deviations in the prices of the two tokens.

The setup wasn’t new. Algorithmic stablecoins, which rely on a complex set of code rather than hard currency reserves to stabilize their price, have been a thing since at least 2015 — and the idea of staking crypto to earn an unrealistically high return exploded in popularity in the last few years alongside the rise of decentralized finance, or DeFi.

But Kwon had a real touch for marketing. He cast himself in the likeness of a next-gen Satoshi Nakamoto (the pseudonymous name given to the founder of bitcoin), crossed with the social media swagger of an Elon Musk.

Kwon raised $207 million for his Terraform Labs, which launched luna and UST, and his almost shameless level of online bravado, in which he shunned the “poor” (that is, luna skeptics) on Twitter, drew in the masses. He inspired an almost cult-like following of self-identifying LUNAtics — including billionaire investor Mike Novogratz, who went so far as to memorialize his membership in this club with a tattoo on his arm.

Terra’s Anchor platform, which really helped to put UST on the map with its outsized return of 20%, could have been a big red flag for savvy investors. Many analysts believed it was unsustainable. At the time, government bonds were paying around 2% and savings accounts less than 1%. But investors piled in anyway, giving luna and UST a combined market value of almost $60 billion at one point.

Now, both tokens are essentially worthless. The failure was so massive, it helped drag down the entire crypto asset class, erasing half a trillion dollars from the sector’s market cap. It also dented investor confidence in the whole space.

It was reportedly Kwon’s second failed attempt at launching an algorithmic stablecoin, though his first effort saw losses in the range of tens of millions of dollars, rather than tens of billions.

But Kwon is already on to his third attempt at launching his own cryptocurrency, and investors are jumping back in with him. The government, however, likely won’t be as forgiving.

A spokesperson for the company declined to comment on the prospect of civil or criminal proceedings facing Terraform Labs or Kwon. But former federal prosecutors and regulators tell CNBC that the fallout from the stablecoin chaos could mean fines, penalties — or, in a worst case scenario for Kwon, time behind bars.

In America, it is not a crime to be a lousy businessman or a careless CEO with poor judgement.

In the case of Kwon, prosecutors would have to prove beyond a reasonable doubt that Kwon or his associates committed criminal fraud — and that requires proof that the defendant intentionally deceived investors.

“It’s not like a homicide where you bring in witnesses to testify to who pulled the trigger,” explained Randall Eliason, who spent 12 years as an assistant U.S. attorney for the District of Columbia and prosecuted white-collar cases in federal court.

“We’re trying to prove what was going on in someone’s mind. That’s often a very painstaking process that involves reviewing lots and lots of documents, and talking to many, many people and dealing with all their lawyers through that process and scheduling grand jury time and court appearances. It can really drag on, so no one should expect anything to happen overnight,” he said.

Even if prosecutors can show that a defendant made false statements, they have to prove the defendant’s state of mind beyond a reasonable doubt, according to Renato Mariotti, a former federal prosecutor and trial attorney who has represented clients in derivative-related claims and securities class actions.

“Because we don’t have a magic telescope to read a person’s mind, prosecutors often rely on emails, texts, tweets and other statements,” said Mariotti.

The hope is to find a smoking gun, but prosecutors rarely find a single email or text message that lays out the whole fraud scheme.

Instead, Eliason says, prosecutors look for little nuggets of information and communications. One classic way to build a fraud case like this would be to “work up the ladder,” building cases against lower-level participants, and then persuading them to cooperate and testify.

Eliason cited the example of Elizabeth Holmes and Theranos, which used other companies’ machines to run blood samples but told investors that it was using its own machines to perform those tests.

“Things like that are pretty suggestive of intent to actually deceive and defraud,” said Eliason, “versus just misjudgments, mistakes, or other lesser forms of misconduct.”

White-collar cases are famous for taking months or even years. If they ultimately culminate in a conviction, the sentencing can be severe.

Stefan Qin, the Australian founder of a $90 million cryptocurrency hedge fund, was sentenced to more than seven years in prison after he pleaded guilty to one count of securities fraud. Roger Nils-Jonas Karlsson, a Swedish national accused by the United States of defrauding over 3,500 victims of more than $16 million was sentenced to 15 years in prison for securities fraud, wire fraud and money laundering.

Do Kwon, co-founder and chief executive officer of Terraform Labs, poses in the company’s office in Seoul, South Korea, on Thursday, April 14, 2022.

While prosecutors have to prove criminal wrongdoing beyond a reasonable doubt, the burden of proof for civil cases is much lower and typically based upon a “preponderance of evidence.”

“Frequently, in these kinds of cases, the appropriate remedies end up being civil, regulatory, and administrative — and actually not criminal,” said Eliason.

Civil cases could include lawsuits from crypto buyers who feel they were burned.

A group of investors in South Korea have come together to file a complaint against Kwon and his Terraform Labs co-founder on two charges including fraud, according to reports from local media. (Multiple attorneys from the Seoul-based law firm LKB & Partners, which brought the suit, did not respond to requests for comment.)

Civil penalties could also include fines or other consequences from regulators like the Securities and Exchange Commission or Commodity Futures Trading Commission.

Philip Moustakis, who served as senior counsel in the SEC’s enforcement division, explains, “The SEC would only have to prove its case by a preponderance of the evidence, meaning a jury would have to find it was more likely than not the defendant engaged in the conduct alleged.”

Penalties could include injunctions, disgorgement (returning gains), or fines based on the amount of the loss, which Eliason says could potentially be “pretty staggering” given the tens of billions of dollars that was wiped out. Kwon already has a complicated history with the SEC that reportedly involves dodging a few subpoenas and filing a motion opposing the regulatory body.

CFTC Commissioner Caroline Pham tells CNBC that while she does not comment on any ongoing or potential litigation, “The CFTC was among the first to successfully prosecute wrongdoing in cryptocurrencies” and the agency continues “to aggressively pursue crypto fraud and manipulation to the fullest extent of our authority.”

Outside the U.S., Kwon could be facing blowback in South Korea, where he currently lives and spent time operating his business, and Singapore, the official headquarters of Terraform Labs.

Seoul is already flexing its authoritative muscle, as the country’s national tax agency has reportedly ordered Kwon and Terraform Labs to pay $80 million (100 billion won) in back taxes. A once-defunct special unit dedicated to investigating financial and securities crimes in South Korea — literally dubbed the “Yeouido Grim Reaper,” in reference to Seoul’s financial district — has been resurrected from a more than two-year dormancy to probe into the Terra collapse.

“There is going to be issues with jurisdiction … since he’s not in the U.S.,” said Eliason. “South Korean authorities might have something to say about possible sanctions. There are a lot of other potential agencies or governments who could take a look at this conduct, in addition to the private individuals who were harmed.”

Meanwhile, Terraform Labs is currently down a few lawyers, after its in-house legal team reportedly resigned following the crash. (CNBC reached out to counsel team members Marc Goldich, Lawrence Florio and Noah Axler on LinkedIn. All three indicated on their profiles that they left the company in May 2022, but they did not respond to requests for comment.)

Within days of the UST catastrophe, the Terraform Labs founder already had a plan to ditch the failed UST stablecoin and relaunch a new luna token. Participants overwhelmingly voted in favor of following through with that plan and reviving the failed venture — even as Kwon amended the proposal while the tally was underway.

A Terraform Labs spokesperson told CNBC that they made some technical corrections two days into the vote and alerted the community of the changes. “There were still five days to vote at the time of the amendment. We encouraged people who disagreed with the amendment to vote no, and if they had already voted, to change their vote.”

The newly listed luna is currently down more than 10% over the last 24 hours, according to CoinMarketCap — but the effort has a lot of big-name backers pushing for it to succeed.

Any success with luna 2.0 could mean a chance to recoup losses for the institutional and retail investors who got wiped out. There was no backstop from the FDIC, nor any other consumer insurance protections, so this kind of token recovery plan was the only chance at redemption for investors who got left holding the bag.

Major backers of Terraform Labs included some of the biggest names in venture capital, including Lightspeed Venture Partners and Coinbase Ventures. Three Arrows Capital and Jump Crypto bought into the luna token.

Crypto heavyweights like Binance founder and CEO Changpeng Zhao (also known as CZ) got in, as well. CZ, whose net worth is estimated to be $16.9 billion, recently lamented on Twitter that he was “poor again,” linking to an article headlined, “Binance’s luna investment was worth $1.6 billion. Now, it’s less than $3,000.”

Binance and FTX both publicly backed Kwon’s plan to relaunch and relist the luna token. And as Binance added luna 2.0 to its exchange on Tuesday, the coin initially saw a 90% price bump.

Meanwhile the only person who has been taken in by authorities is a crypto investor accused of ringing the doorbell of Kwon’s apartment in Seoul and asking Kwon’s wife whether her husband was home. A report from the South Korean newspaper The Chosun Ilbo says the suspect — who reportedly lost as much as $2.3 million following Terra’s collapse — now faces trespassing charges.