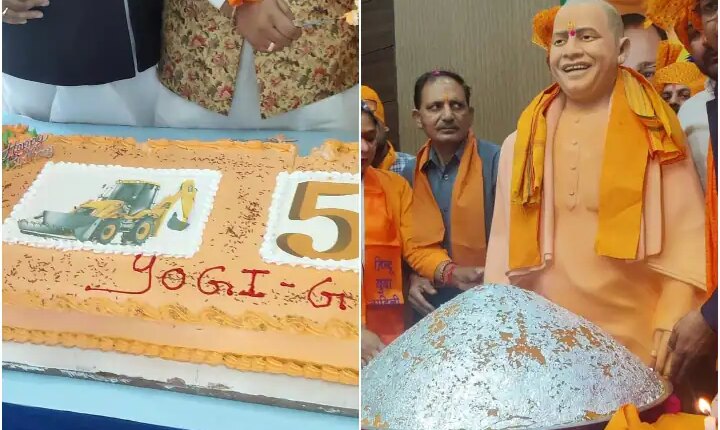 CM Yogi Birthday Celebration: On behalf of Hindu Yuva Vahini and Vishwa Hindu Mahasangh (Delhi Pradesh), a living statue of Yogi was installed in the Constitution Club of Delhi on the 50th birthday of UP Chief Minister Yogi Adityanath. During this, 50 kg of bhog was prepared, 50 lamps were lit and a Yogi tree was also planted. Vishwa Hindu Mahasangh has prepared a 50 kg cake on the birthday of Yogi Adityanath, on which the photo of Bulldozer Cake was also put on it, congratulating the birthday.

Devendra Singh, Delhi State President of Vishwa Hindu Mahasangh said that Baba ji is known only because of the bulldozer. Today bulldozer action is being taken in all the states. The rule of goons is over in UP, roads have become better, Ram temple is being built etc. We are very happy with all the work. We hope that one day he will become the Prime Minister. On the other hand, Hindu Yuva Vahini, Delhi State President Dinesh Agarwal said that we wanted Maharaj ji to be present on this occasion, we had talked to the temple and people with him to call him. But this was not possible, so we got this statue made. His fans are celebrating the birthday of UP CM Yogi in their own way. During this, the workers looked excited and kept trying to feed the statue with laddoos.

Let us tell you that today is the birthday of UP Chief Minister Yogi Adityanath. On this occasion, many people are congratulating him. President Ram Nath Kovind, Prime Minister Narendra Modi (PM Modi) including many dignitaries also called CM Yogi Adityanath Congratulated him on Sunday on the 50th anniversary of. He was sworn in as the Chief Minister of Uttar Pradesh after a five-year term on March 25, 2022, winning the election for the second time with an absolute majority. This time he has become MLA for the first time by contesting from Gorakhpur city assembly seat and winning by record votes.