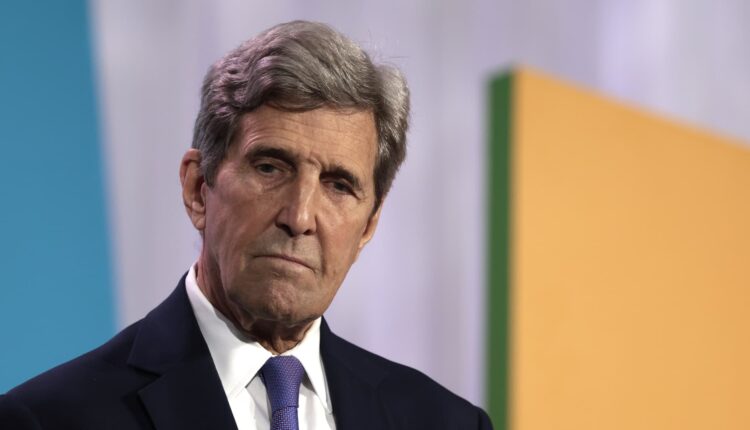 Special Presidential Envoy for Climate John Kerry listens as President Gabriel Boric Chile speaks before a signing ceremony for the “International Coalition to Connect Marine Protected Areas” at the CEO Summit of the Americas on June 09, 2022 in Los Angeles, California. The CEO Summit entered its’ second day of events alongside the Summit of the Americas, which is hosting leaders from across the Western Hemisphere.

Rebuilding the economy to decarbonize is necessary to minimize the death and destruction caused by global warming. But it’s also one of the largest opportunities to make money in generations, according to comments made by the Special Presidential Envoy for Climate John Kerry on Thursday.

“This is the largest market the world has ever been staring at: The energy transition market,” Kerry said at the IV CEO Summit of the Americas hosted by the U.S. Chamber of Commerce in Los Angeles.

“Every aspect of life can be impacted in a positive way. It’s not something to fear — that we have to shun and shy away from. We have to embrace this transition which will, in the end, I guarantee you, be larger than ultimately than the Industrial Revolution was.”

The Industrial Revolution is the time period from the mid-1700s to the mid-1800s, approximately, when processes went from being done by hand to being done by machine.

It’s an opportunity, however, that the United States is not taking as seriously as many other nations in the world, Kerry said.

“Every country I am visiting is more seized by this issue than we are yet in the United States, regrettably,” Kerry said. “And I say that really sadly.”

Kerry blamed, at least in part, political polarization for slowing down the progress the United States is making.

“We can do this. We can do a whole bunch of this right now, except for our politics,” Kerry said.

Kerry said even the many countries that are moving faster than the United States are not moving fast enough.

Nations around the globe need to deploy renewables, like wind and solar, five or six times faster than they are currently to meet the preferred target of the Paris Agreement. The agreement is a goal established in 2015 by the international community to limit global warming to “well below” 2 degrees Celsius — “and preferably” to 1.5 degrees Celsius — compared with pre-industrial levels.

The global community needs to transition away from coal six times faster than we are and deploy electric vehicles 22 times faster than it is currently happening, according to the International Energy Agency, Kerry said.

Kerry said that reducing emissions to limit global warming is not a matter that should be debated.

“It is driven by biology, chemistry, physics, mathematics,” Kerry said. “And it is predictable and has been predicted for 35 years.”

In addition to the political hurdles the United States is facing, it also needs a “full-fledged” buy-in from the private sector, Kerry said.

“Our enemy right now, and I say this politely, is the status quo. We are fighting against people who still want to choose the path of least resistance to this challenge,” Kerry said. “And it happens, unfortunately, to be the path of greatest destruction.”