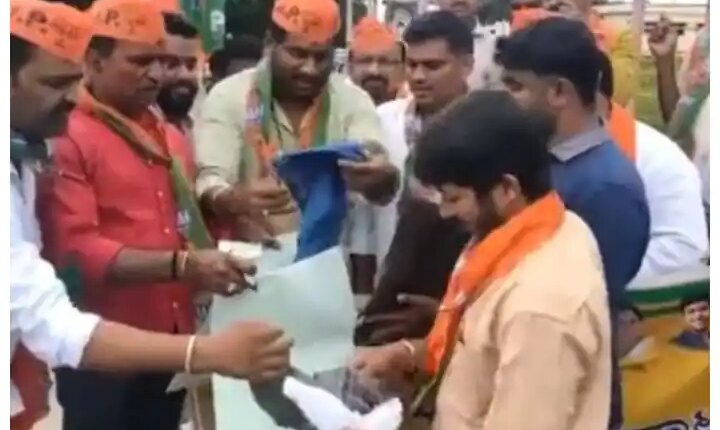 Karnataka BJP Workers Collect Chaddis To Send Congress: In Karnataka, now a war has broken out between Congress and BJP over Chaddi Row. Politics is being done loudly on this. When the Congress sitting in the opposition lit Khaki Shorts to oppose the RSS, BJP and RSS workers got furious and started the Chaddi Campaign. RSS workers wear khaki shorts or shorts and are angry over the issue of burning it. There has been a massive debate in the state regarding this issue.

In fact, in Karnataka, Congress protested against BJP-RSS by burning khaki shorts. After which BJP and RSS workers got angry. BJP workers are now collecting trunks to be sent to the Congress office in Bangalore. Sending to Congress headquarters in Bangalore has also been started. BJP workers say that these tights will be gifted to former CM Siddaramaiah.

tights dispute between bjp and congress

Karnataka Chief Minister Basavaraj Bommai has said that the Congress is running a campaign of defamation against the RSS, but the public knows everything. He said that RSS is a patriotic and nationalist organization which is engaged in the work of social service. Union Minister Prahlad Joshi has also launched a scathing attack on the Congress amid the ‘tights’ controversy in Karnataka.

Congress in Karnataka staged a protest against BJP-RSS by burning Khaki Chaddis.

BJP workers now are collecting chaddis to send them to INC Karnataka office.

It’s an all out war on chaddis in Karnataka.

Union Minister Prahlad Joshi hit out at the Congress, saying that people have snatched their ‘tights’. Joshi said in Vijaypur that because people have taken off their trunks, they are burning the trunks of the RSS. The people of Uttar Pradesh have taken off the trunks of Congress in front of the whole country. The same thing happened in Assam. Now the tights have come loose with the party of Pilot and others in Rajasthan. Congress has lost its trunks everywhere in Chhattisgarh, Madhya Pradesh.

How did the controversy start?

The controversy began when some members of the National Students’ Union of India (NSUI), the student wing of the Congress, protested against the alleged “saffronisation” of school textbooks in the state, outside the residence of state education minister BC Nagesh in khaki shorts ( Khaki Shorts) lit. In the midst of all this, the ongoing textbook revision controversy in Karnataka intensified after former Chief Minister Siddaramaiah raised new questions against the RSS. He said that the RSS is a non-secular organization. Has any member of Dalit, OBC or minority community ever become a Sarsanghchalak?