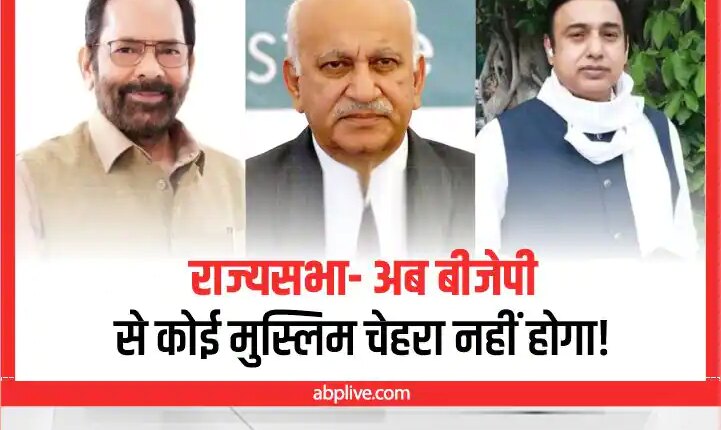 Rajyasabha Elections: After Loksabha, now no Muslim face will be visible from BJP side in Rajya Sabha also. The BJP has announced the candidates for the Rajya Sabha elections to be held on June 10, but this time there is no Muslim face among these candidates. Earlier, the party had made three Muslim leaders as Rajya Sabha MPs, including Union Minister Mukhtar Abbas Naqvi, former ministers MJ Akbar and Zafar Islam, but the tenure of these people. Now it is about to end, so now after Lok Sabha there will be no Muslim face MP (MP) from Rajya Sabha as well.

Mukhtar Abbas Naqvi is currently a minister in the Modi government and if he does not become an MP in 6 months, then his ministerial post is sure to go. But there is also news that the party can get him to contest the Lok Sabha by-election from Rampur seat this time. Because after the resignation of SP leader Azam Khan, Rampur seat has become vacant and by-election has also been announced on this seat. Mukhtar Abbas Naqvi has already contested the Lok Sabha elections from Rampur seat.

There is no Muslim MP of BJP in Lok Sabha too.

If we talk about Loksabha, then already there is no Muslim MP of BJP. In the last election, tickets were given to some Muslim faces from the party, but no Muslim face was able to win. Yes, if we talk about NDA, then the only Muslim face from Bihar is Mehboob Ali, who has reached the Lok Sabha by winning the LJP seat.

read this also: War of words broke out between BJP-Congress over nomination for Rajya Sabha elections in MP, know who will get how many seats?

read this also: Uttarakhand News: Kalpana Saini, the BJP candidate for Rajya Sabha, filled the form, know the important things related to her