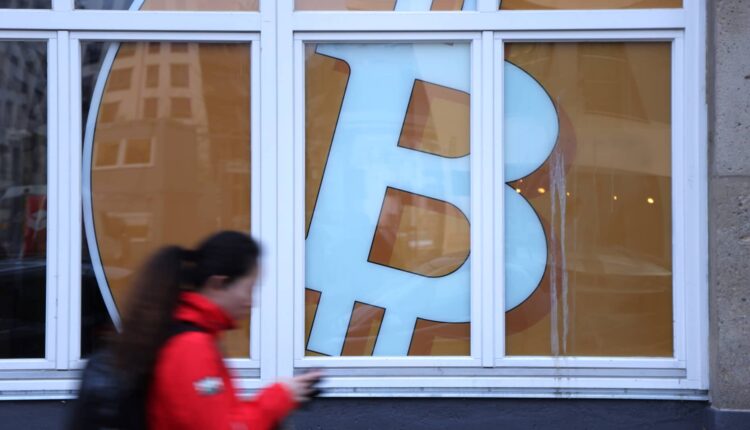 A young woman walks past a Bitcoin symbol in the window of a company that offers blockchain application services.

Bitcoin rose over the weekend as cryptocurrency investors continue to look for a bottom following a rough six months of selling.

The largest cryptocurrency by market cap was higher by 4.6% Monday, according to Coin Metrics. Ether advanced nearly 5%.

Crypto has continued to move in tandem with stocks. All three of the major stock averages were higher on Monday too. Investors have held their breath while watching prices across risk assets move higher, uncertain if the moves are temporary or if a more permanent reversal is finally here.

Some still say it’s too early, however.

“We believe this relief rally is a bull trap, and that bitcoin may have a short-lived gain but is more than likely going to resume the downward trend we’ve seen for the past two months,” said Josh Olszewicz, head of research at Valkyrie Investments. “Uncertainty in the global economy due to high inflation and the likelihood we are in a recession, paired with the prevalence of central bankers raising rates, is likely going to force all assets downward at least through the end of the summer.”

“We still believe this confluence of factors is likely to lead bitcoin to fall as low as $22,000 before rallying later this year, mainly because that level is where many institutions and large corporates bought in and they are highly unlikely to let their trade go too far underwater,” he added.

Last week bitcoin and ether both turned green for their first positive week in nine, according to Coin Metrics. That was the longest running losing streak ever for the cryptocurrencies.

Bitcoin has more than halved since hitting its all-time high of $68,982.20 in November. It was trading in a tight range this year before falling below $30,000 this month after the Terra collapse.

“Token prices fell 27% in May, following a 20% decline in April,” said Kenneth Worthington, a JPMorgan research analyst, in a note Monday. “The already challenged April environment was exacerbated in May by the collapse of the UST algorithmic stablecoin that drove a combination of forced selling and uncertainty to negatively impact the broader cryptoecosystem. While trading volume appears somewhat higher in May from a depressed April, nearly all the other gauges of growth declined this past month.”

Worthington also said crypto is “in need of a fresh catalyst,” and that it could be the Ethereum merge.

Last month, another JPMorgan strategist, London-based Nikolaos Panigirtzoglou, said he sees about 30% upside for bitcoin after the recent washout.