Biden calls on Congress to act on gun control 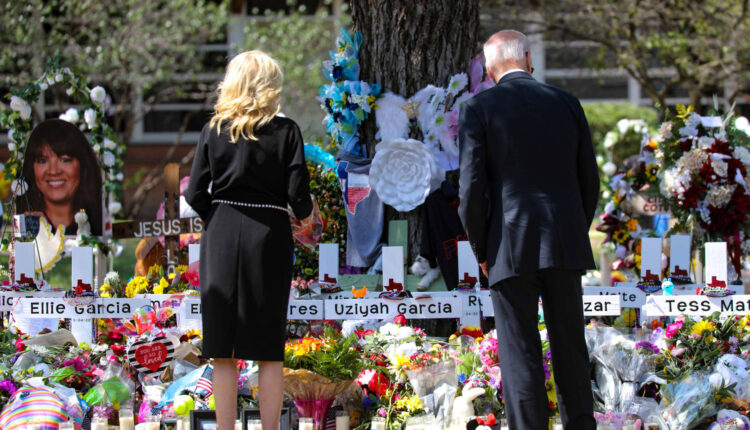 In what the White House billed as a major address on gun control legislation, Biden once again pleaded with Congress to act.

“I support the bipartisan efforts that include a small group of Democrats and Republican senators trying to find a way. But my God — the fact that the majority of the Senate Republicans don’t want any of these proposals even to be debated or come up for a vote, I find it unconscionable.”

He said lawmakers should reinstate the ban on assault weapons, like AR-15s, and a ban on high capacity magazines. If those weapons aren’t banned, the age to purchase them should be raised to 21 from 18.

“Why in God’s name should an ordinary citizen be able to purchase an assault weapon that holds 30 round magazines, that lets mass shooters fire hundreds of bullets in a matter of minutes,” Biden said.

US President Joe Biden and First Lady Jill Biden pay their respects at a makeshift memorial outside of Robb Elementary School in Uvalde, Texas on May 29, 2022.

Biden said Congress should also strengthen background checks, including requiring them at gun shows and online sales, and enact safe storage and red flag laws and repeal the immunity that protects gun manufacturers from liability.

He also called for actions to address mental health, including more school counselors and other mental health services for students and teachers.

“I’ll never give up. If Congress fails, I believe this time a majority of American people won’t give up either,” Biden said. “I believe the majority of you will act to turn outrage to make sure this issue is central to your vote. Enough, enough, enough.

The evening remarks from the White House came after another mass shooting in Oklahoma Wednesday, when four people were killed after a gunman opened fire inside a Tulsa hospital.

Biden has repeatedly pleaded with Congress to pass stricter gun control laws as a string of mass shootings stunned the country in the past few weeks. On May 24, 19 children and two teachers were killed during an elementary school shooting in Uvalde, Texas. Ten days prior, on May 14, a gunman killed 10 people at a Buffalo, New York, grocery store.

The president recounted his conversations with the families of Uvalde victims, including a letter from a woman who lost her grandmother who asked Biden to “erase the invisible line that is dividing our nation.” He recounted that a sister of the teacher who was killed and whose husband died of a heart attack two days later had asked him what she could tell her nieces and nephews who were now orphaned.

“They’ve been turned into a killing field,” Biden said of his trip to Uvalde. “Standing there in that small town, like so many other communities across America, I couldn’t help but think there are too many other schools, too many other everyday places that have become killing fields, battlefields here in America.”

Biden has urged Congress to pass an assault weapons ban and legislation requiring universal background checks, including for those who buy firearms at gun shows or from private sellers.

“For so many of you at home, I want to be very clear, this is not about taking away anyone’s guns. It’s not about vilifying gun owners,” Biden said. “In fact, we believe we should be treating responsible gun owners as an example of how every gun owner should behave.”

Those measures currently lack support in Congress though a bipartisan group of Senators has been discussing a slimmed-down package of reforms.

Biden has said there is little left for him to do through the executive branch, and that any significant reforms must come from Congress.

Congress is considering gun violence proposals on parallel tracks. The House Judiciary Committee met Thursday to approve a package of bills including raising the age to buy semi-automatic rifles from 18 to 21, as well as restrict large capacity magazines.

But those proposals are likely dead on arrival in the Senate, where 60 votes are needed to break a filibuster. Bipartisan negotiations continued this week on a more modest measure including red flag laws, school safety provisions and potentially new rules on background checks.