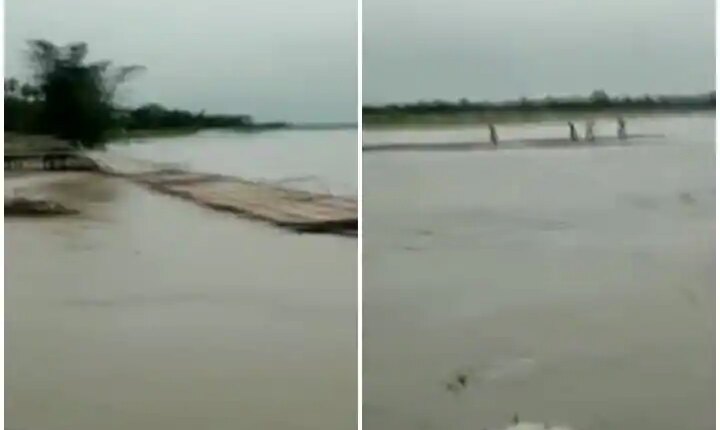 Assam Viral News: In the northern states of the country, where the common life has become very miserable with increasing heat. On the other hand, the situation in the Northeast states of the country is completely opposite. In Assam, there has been a flood situation due to rain for the past several days. Due to this, heart-wrenching footage is coming out from the flood-hit areas of Assam.

Recently a video has surfaced on social media, seeing which everyone is shocked. In the video, a bridge made of bamboo is seen flowing after being hit by a flooded river. The surprising thing in this is that 4 people were present on the bamboo bridge when it was flowing into the flooded river.

#WATCH Assam: A bamboo bridge was washed away due to rising water level of Nangal Bhanga river in Chirang district. There were 4 people on the bridge at that time who were rescued by the local people.

The water level of the river has increased significantly due to incessant rains for the last few days. pic.twitter.com/kvo7RQ2xPj

According to the information, the water level of Nangal Bhanga river suddenly increased in Chirang district of Assam. Due to which the bamboo bridge built on the river broke and started flowing over the river. It was fortunate that due to the bamboo bridge, it started floating on the surface of the river. At the same time, before the bridge collapsed, 4 people crossing it got stuck.

According to the information received at the moment, due to the vigilance of the local people, all the four people were saved safely before flowing into the river from the bamboo bridge. It is being told that due to the continuous rains in these areas of Assam for the past several days, the water level of the river has increased to a great extent.