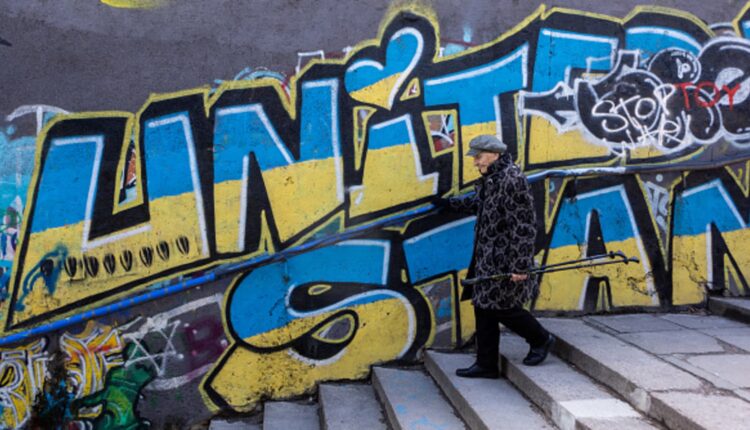 Since Russia invaded Ukraine on Feb. 24, artists around the world have created poignant murals to support Ukraine. Here’s how artists have depicted the war across continents:

Street artist Denys Antiukov and his assistant Hanna work on a mural inspired by the Russian Warship, Go F… Yourself! postage stamp in the Khortytskyi district of Zaporizhzhia, southeastern Ukraine.

A person walks next to a mural of Russian President Vladimir Putin, which has been vandalised with red spray paint and the word “War” written instead of the original text reading: “Brother”, following Russia’s invasion of Ukraine, in Belgrade, Serbia, April 29, 2022.

Fresco murals by French street artists Kelu Abstract and Jeff Aerosol are displayed on the wall of a Parisian building on March 14, 2022 in Paris, France.

A fresco mural by French street artist Julien Malland aka Seth Globepainter is displayed on the wall of a Parisian building on March 14, 2022 in Paris, France.

A man takes a picture of a fresco mural by French street artist Sara Chelou displayed on “The walls of peace” on March 28, 2022 in Paris France.

A man takes a picture of a fresco mural by French street artist Eric Ze King aka EZK displayed on “The walls of peace” on March 28, 2022 in Paris France.

French street artist and painter Christian Guemy (R) known as C215 poses in front of his fresco depicting a Ukrainian young girl with a quote attributed to Ukrainian President Volodymir Zelensky I really don’t want my photos in your offices, because I am neither a god nor an icon, but rather a servant of the Nation.

A man takes a picture of a fresco murals displayed on “The walls of peace” on March 28, 2022 in Paris France.

A child walks past by a graffiti made by the artist Vladimir Ovchinnikov in Borovsk, some 100kms south-west of Moscow, on April 14, 2022. Retired engineer Vladimir Ovchinnikov has spent decades painting murals on buildings in and around his small town south of Moscow. But since the outbreak of Russia’s conflict with Ukraine, the 84-year-old has found that some of his art is not welcome.

Rome, the new mural by the artist Maupal against the invasion of Ukraine by Russia depicting two Matryoshkas.

Anti-Ukraine war mural by Italian street artist known by the name of ‘Laika’ depicting a hug between two women, one dressed in the Russian, the other in the Ukrainian national colors, respectively, above the word MIR (Peace) In the Ostiense district on March 09, 2022 in Rome, Italy.

Peace. The new mural by street artist Laika dedicated to the crisis between Russia and Ukraine.

A mural depicting a Ukrainian child under the SOS writing, created by the street artist known as ‘Harry Greb’, is seen next to the Coliseum metro station on March 17, 2022 in Rome, Italy.

Murals of two young Ukrainian victims portrayed on the wall. On the left, Vitaliy Skakun Volodymyrovych (1996-2022) who is seen as a hero by the Ukrainian army for his heroic action during the explosion of a bridge to stop the Russian army, on the right, 10 year old Ukrainian Polina, murdered by Russian soldiers when she and her family tried to flee Kyiv by car.

A woman walks pass the mural “No to war” by muralist Maximiliano Bagnasco in Buenos Aires on March 5, 2022.

A passer-by is seen observing the graphic representation of Ukraine’s president Zelensky calling for an end to the Russian invasion is seen in Plaza de Sant Jaume.

A passer-by is seen taking photos of artist TvBoy’s new collage for peace in Ukraine. TvBoy, the Italian artist living in Barcelona, installs a new collage on the war in Ukraine in Plaza de Sant Jaume, representing three children installing a flag of peace on a Russian tank.

A woman looks at a new work by Italian street artist TvBoy that depicts Russian President Vladimir Putin in prison, in Barcelona on March 31, 2022.

A newsagent picks up magazines next to a mural by Italian urban artist Salvatore Benintende aka “TV BOY” depicting a girl painting a peace symbol on an Ukraine’s flag, reading “Hope” in Barcelona on April 30, 2022.

A mural of Putin, Hitler, and Stalin with a slogan ” No More Time” is seen on the wall next to the PKM Gdansk Jasien train station.

Yellow heart pierced by bullets on a blue background with inscription in Ukrainian and Polish – “Ukraine is fighting” – is seen in Gdansk, Poland on 6 March 2022 The mural was created to support Ukrainian people during the Russian war against Ukraine.

A mural by graffiti artist KAWU depicting Ukrainian President Volodymyr Zelenskiy as Harry Potter with Z on his forehead (instead of lightning bolt) symbolising Russia’s invasion of Ukraine is seen in Poznan, Poland March 9, 2022.

Kyiv, a mural against Putin in the city center, the inscription reads: Ukraine 5: Putin 0.

Young people ride their e-scooters past a ‘stop the war’ poster in central Kyiv on May 19, 2022 in Kyiv, Ukraine.

Ukrainian soldiers take pictures of a mural titled ‘Saint Javelin’ dedicated to the British portable surface-to-air missile has been unveiled on the side of a Kyiv apartment block on May 25, 2022 in Kyiv, Ukraine. The artwork by illustrator and artist Chris Shaw is in reference to the Javelin missile donated to Ukrainian troops to battle against the Russian invasion.

People take pictures of a sculpture depicting the President of Russia Vladimir Putin called “Shoot yourself” in the centre of Kyiv.

A satirical poster featuring Russian President Vladimir Putin is seen in the central shopping area on April 25, 2022 in Lviv, Ukraine.

A satirical poster featuring the boot of the Ukrainian army pressing on the head of Russian President Vladimir Putin is seen on April 25, 2022 in Lviv, Ukraine.

A woman sits in front of a graffiti tribute to the Ukrainian Military and their ongoing war with Russia.

A cyclist passes by a part of the Berlin Wall decorated with a graffiti of a Ukrainian flag colored Peace symbol, expressing solidarity with Ukraine at Potsdamer Platz on May 4, 2022 in Berlin, Germany.

VILNIUS, LITHUANIA – APRIL 26: Street art paintings which supports Ukraine on April 26, 2022 in Vilnius, Lithuania. Russia invaded neighbouring Ukraine on February 24, 2022, and has been met with worldwide condemnation in the form of rallies, protests and peace marches taking place in cities across the globe. (Photo by Paulius Peleckis/Getty Images)

VILNIUS, LITHUANIA – APRIL 26: Street art paintings which supports Ukraine on April 26, 2022 in Vilnius, Lithuania. Russia invaded neighbouring Ukraine on February 24, 2022, and has been met with worldwide condemnation in the form of rallies, protests and peace marches taking place in cities across the globe. (Photo by Paulius Peleckis/Getty Images)

People pass a mural of President of Ukraine Volodymyr Zelenskyy, by the artist Phil Atkinson in Granard, County Longford, Ireland.

New street art which has appeared in Leith, Edinburgh, in response to Russia’s invasion of Ukraine. The mural features a Nightingale, the official national bird of Ukraine, against the country’s flag. Picture date: Tuesday April 5, 2022.

Artwork of Ukrainian president Volodymyr Zelenskyy being portrayed as Superman is seen on a wall of a shop, on May 15, 2022 in Bristol, England.

A resident looks at new street art mural has appeared in Cardiff depicting Ukraine’s capital Kyiv under siege on March 01, 2022 in Cardiff, Wales.

A woman walks past a graffiti mural, showing a child protecting with a Ukrainian flag against the war, made by artist ChemiS, on March 19, 2022 in Prague.

Stop the War and the pro Russian ‘Z’ with a cross through it, solidarity with Ukraine graffiti in Shoreditch, London.

A man walks past a mural in support of Ukraine by artist WOSKerski, as Russia’s invasion of Ukraine continues, in London, Britain, March 14, 2022.

A mural depicting Ukrainian president Volodymyr Zelenskyy and ‘Glory to Ukraine’ slogan written in Polish is seen in Krakow, Poland on 22 March, 2022.

An artist showing a protest symbol power sign by a street mural created by a group of Artists from Maasai Mbili depicting Kibera’s love for Ukraine a midst the war.

A girl poses by a street mural created by a group of Artists from Maasai Mbili depicting a sign of love from Kibera to Ukraine a midst the war.

A person walks past the ‘To Ukraine With Love’ mural by artists Corie Mattie and Juliano Trindade depicting Russian President Vladimir Putin on March 14, 2022 in Los Angeles, California.