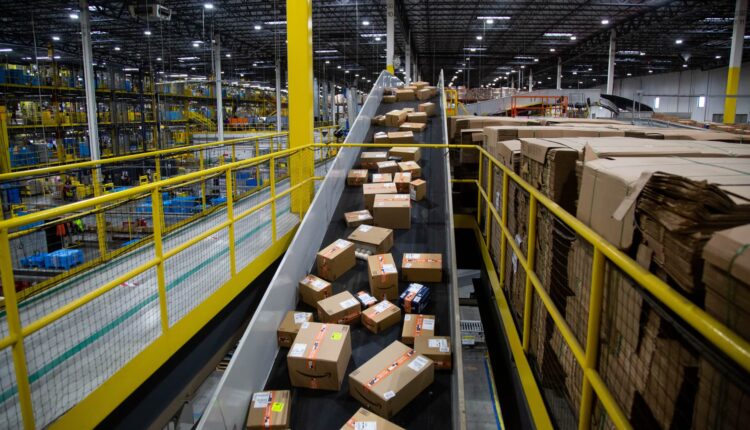 Packages move along a conveyor at an Amazon fulfillment center on Cyber Monday in Robbinsville, New Jersey, U.S., on Monday, Nov. 29, 2021.

Amazon is so concerned about potential tech antitrust reforms swirling through Congress that a senior executive recently tried lobbying third-party sellers on an online forum that they use to communicate with one another about hot topics.

But the effort appeared to backfire, as many sellers disputed Amazon’s argument and said they intend to support the legislation, which seeks to overhaul U.S. antitrust laws and reel in the power of Big Tech.

Dharmesh Mehta, Amazon’s vice president of worldwide selling partner services, published the post on Thursday in Amazon’s Seller Central Forum. He encouraged merchants to contact their local senator to oppose the legislation, called the American Innovation and Choice Online Act (S.2992), which was passed by a Senate committee in January and could move forward this summer.

“As we have noted in previous communications to you throughout the past year, Congress is considering legislation, including S.2992, the American Innovation and Choice Online Act, that could jeopardize Amazon’s ability to operate a marketplace service and, as a result, your business’s ability to sell in our store,” Mehta wrote. “Recent public comments from Senate leadership indicate that they intend to vote on S.2992 later this month. I want to ensure that you are aware of this legislation and what you can do to try and stop it from harming you.”

Mehta then directed Amazon sellers to a website that includes a form they can use to contact their senator. The page is populated with a prewritten email opposing the legislation, and says filling out the form “will take less than two minutes of your time.”

Hundreds of sellers replied to Mehta’s post, including many who seemed unconvinced by Amazon’s point of view and promised to support the legislation. Third-party sellers, who account for more than half of Amazon’s retail volume, have in recent years expressed frustration over the costs they pay to stay in good standing, the amount Amazon charges them for ads and Amazon’s inability to rid the marketplace of scams and bad actors.

“Yes, I’m going to oppose that Amazon will be prohibited from undercutting, manipulating the buybox, and instituting restrictions on certain listings that unfairly bar me from selling an item,” one commenter wrote. “Yup, writing to my senator right now.”

Another wrote that, “Any informed seller is going to support massive action taken against Amazon in the antitrust arena. I am personally sick of the condescending posts by Amazon management directed at us. We are not morons and know how to read and think for ourselves.”

Amazon has staunchly opposed the bill, which would bar it and other tech companies from giving preferential treatment to their own businesses on their platforms. Amazon in August emailed sellers and created a website to brief them on the legislation and warn them of its potential to harm their business.

Last week, Amazon published a blog post arguing the legislation would jeopardize “two of the things American consumers love most about Amazon: the vast selection and low prices,” as well as its Prime two-day delivery service.

Amazon contends that it is being unfairly targeted in the bill, which holds that only companies with market caps of $550 billion and more would be subject to regulation. The e-commerce giant said that excludes “thousands of other retailers” such as Walmart, Target and Costco.

Not every response to Mehta’s post came in opposition. One commenter said the proposed legislation could hurt sellers just by harming Amazon.

“I can’t predict the future, and big secret neither can the gang in Washington,” the person wrote. “I can tell you that this bill is bad news for Amazon, bad news for Amazon customers, and if you think that doesn’t mean bad news for sellers, then you must not be a third-party seller.”

WATCH: Inside the rapid growth of Amazon Logistics and how it’s taking on third-party shipping

Here’s why the NAACP keeps talking about student loan cancellation