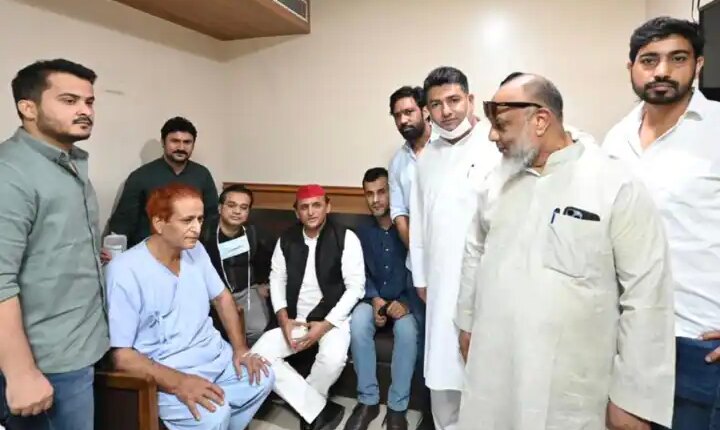 There he stayed with Azam Khan for about three hours. During this, Akhilesh held all political talks with Azam Khan. According to party leaders, in this meeting, Akhilesh told Azam Khan about the eagerness of the party leaders regarding the Legislative Council elections, and also informed about how allies are pressuring him to go to the Legislative Council. Along with this, who should be contested by Akhilesh in the by-elections to be held on Azamgarh and Rampur parliamentary seats? Discussed this with Azam Khan too.

We all pray that Azam Sahab gets well soon. pic.twitter.com/jFX4Izdx3f

Now this week Akhilesh Yadav will announce the names of party candidates contesting from Azamgarh and Rampur Lok Sabha seats. It is believed that Akhilesh Yadav is in the mood to contest from Azamgarh, his wife Dimple Yadav and Sidra Khan from Rampur parliamentary constituency. Sidra Khan is the wife of Azam Khan’s elder son Aadib Khan. Along with this, he will also decide which four people will be sent from the quota of Samajwadi Party in the Legislative Council. These Legislative Council elections are also very important for Akhilesh Yadav.

Will try the same formula as Rajya Sabha

In such a situation, it has to be seen whether Akhilesh Yadav will try the same formula as Rajya Sabha in the Legislative Council elections or is there going to be a new political bet? By the way, SP Akhilesh Yadav does not have a chance to play a new political bet. He needs Om Prakash Rajbhar and Swami Prasad Maurya just like Jayant Chaudhary. For the strength of coalition politics, Swami Prasad Maurya and Om Prakash Rajbhar must be obeyed, Azam Khan has probably given them the same advice. Now Akhilesh Yadav has to decide how he will deal with the pressure the party leaders are putting on him to go to the Legislative Council.