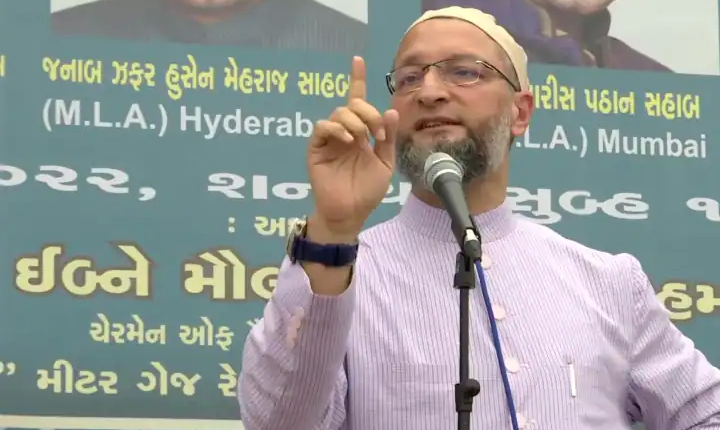 FIR Against Owaisi: The name of AIMIM Chief Asaduddin Owaisi has also been included in 2 FIRs registered by Delhi Police regarding provocative statements. Along with this, the name of Yeti Narasimhanand has also been added to the FIR. Both these names are included in the FIR, in which a case was already registered against eight people including Nupur Sharma and Naveen Jindal. Delhi Police has also issued notices to social media platforms and sought information from them in connection with the two FIRs registered in the matter of spoiling the atmosphere. Along with this, Delhi Police has also made an appeal that such posts should be avoided, which can spoil the atmosphere.

AIMIM had announced a protest at Jantar Mantar in the national capital today in protest against Nupur Sharma’s controversial statement on Prophet Mohammad. Some women workers of AIMIM also reached the Sansad Marg police station, who have been taken into custody by the police. AIMIM had a sit-in protest at Jantar Mantar against Nupur Sharma’s statement, which was not allowed by the police. After this, at around 12:00, suddenly 25 to 30 workers reached Parliament Street, after which the police immediately took them on the bus and took them away. After that the police took three workers to the Parliament Street police station and went away. Later three to four women workers arrived one by one and they were also taken inside by the police in the Parliament Street police station.

Earlier, Delhi Police registered an FIR against former BJP spokesperson Nupur Sharma for making derogatory remarks during a TV debate on Prophet Mohammad. Along with this, an FIR was also registered against eight other people for provocative posts on social media regarding Prophet Mohammad. The name was also included in the second FIR against BJP’s Naveen Jindal, journalist Saba Naqvi by the Special Cell of Delhi Police. Shadab Chauhan, Maulana Mufti Nadeem, Abdur Rehman, Gulzar Ansari, Anil Kumar Meena and Pooja Shakun are named in this. Delhi Police is now preparing to send notices to these people for questioning.

A case has been registered against all of them on behalf of Delhi Police for being involved in spreading and inciting enmity and creating rift in mutual brotherhood. The names of Nupur Sharma, Naveen Kumar Jindal, Shadab Chauhan, Saba Naqvi, Maulana Mufti Nadeem, Abdur Rehman, Gulzar Ansari, Anil Kumar Meena and Pooja Shakun are included. The IFSO unit of Delhi Police has registered a case against these people under different provisions.

It is worth noting that before this, BJP has already suspended Nupur Sharma, while taking action against the controversial remarks on Prophet Mohammad, while Naveen Jindal has been expelled from the party. Intelligence Fusion and Strategic Operations (IFSO) while talking to news agency ANI told that the police have registered FIR against several people and their role in spreading false information with intent to hurt the social fabric will be investigated. .