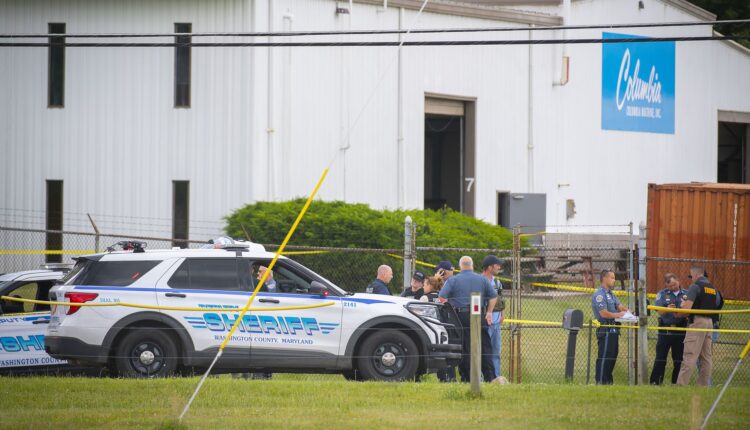 Law enforcement officials stand near the scene of a shooting at Columbia Machine, Inc., in Smithsburg, Md., Thursday, Jan. 9, 2022.

Three people were killed in a shooting at a manufacturing plant in Smithsburg, Maryland, on Thursday afternoon, authorities said.

A law enforcement official who confirmed the fatalities also said four others were injured in the attack.

A Maryland state trooper suffered a minor injury in a confrontation with the suspect, who was captured and is alive, the official said.

NBC Washington captured imagery of the location where the trooper and the suspect clashed — a roadway with a Mitsubishi Eclipse coupe and an unmarked police SUV.

The roadway was littered with evidence markers.

Gov. Larry Hogan said at an impromptu news conference that the suspect was chased by vehicle and that a trooper who confronted the alleged shooter was struck by gunfire and returned fire.

“The suspect is no longer a threat to the community,” the Washington County Sheriff’s Office said in a statement.

The Bureau of Alcohol, Tobacco, Firearms, and Explosives said it was responding to the scene to help with the investigation.

The area of the attack is about eight miles east of Camp David, the presidential retreat. There’s no indication the violence was related to the retreat.

The attack took place at about 2:30 p.m. and was initially considered an active shooter situation. NBC Washington reports the incident happened at a manufacturing facility.

Exact conditions of the injured were unavailable.

This is a developing story. Please check back for developments.

It’s not Apple or Tesla, but Inrix has data from 500 million vehicles